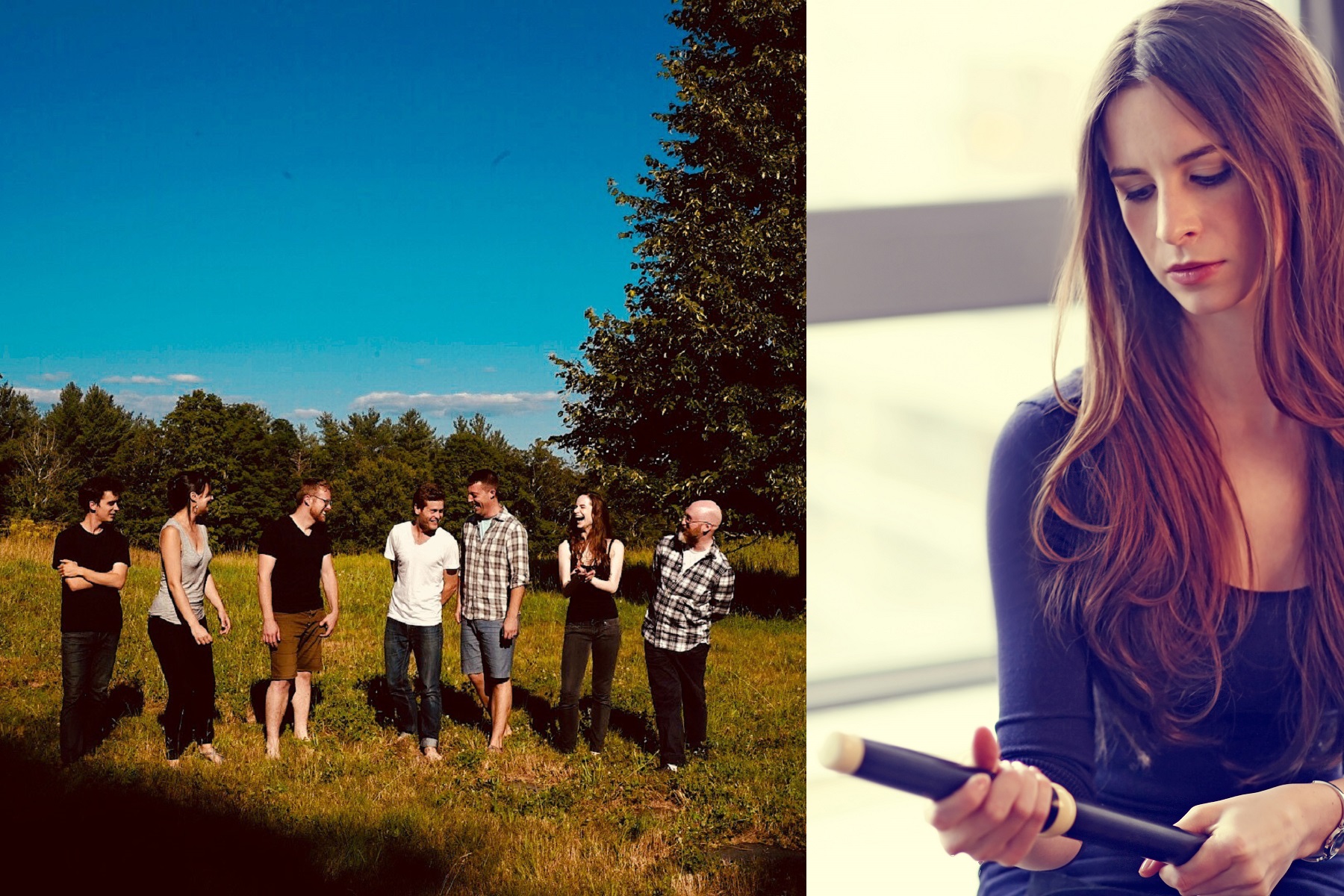 Fresh off their recording collaboration for Fly the Coop, acclaimed virtuoso flutist Emi Ferguson and RUCKUS, the six-member continuo band, offer a lively and wild romp through some of Bach’s most playful and transcendent works.These idiosyncratic performers reimagine Bach for 21st-century fans of 18th-century performance practice. According to Emi, this is Bach “infused with equal parts tradition, funk, whimsy, and fun.”

“Emi Ferguson led on Baroque flute … with a Romantic, even operatic, emotiveness. Every bit as expressive, the five-piece “Baroque band” RUCKUS brought continuo playing to not simply a new level, but a revelatory new dimension of dynamism altogether.” —The Boston Musical Intelligencer

English-American performer and composer Emi Ferguson’s unique approach to the flute can be heard in performances that alternate between the silver flute, historical flutes, and auxiliary flutes. She plays repertory that stretches from the Renaissance to today.

Emi can be heard live in concerts and festivals around the world as a soloist, and with groups including AMOC, the New York New Music Ensemble, the Handel and Haydn Society, and the Manhattan Chamber Players. She has spoken and performed at several TEDX events and has been featured on media outlets including The Discovery Channel, Vox’s Explained series on Netflix, Amazon’s The Marvelous Mrs. Maisel, and Juilliard Digital’s TouchPress apps—talking about how music relates to our world of today. Her debut album, Amour Cruel, an indie-pop song cycle inspired by the music of the 17th-century French court, was released by Arezzo Music in September 2017, spending four weeks on the Classical, Classical Crossover, and World Music Billboard Charts. Emi’s collaboration with RUCKUS, Fly the Coop: Bach Sonatas and Preludes, debuted at #1 on the iTunes Classical Charts and #2 on the Billboard Classical Charts and features the program you are hearing today.

Emi was a featured performer alongside Yo-Yo Ma, Paul Simon, and James Taylor at the 10th Anniversary Memorial Ceremony of 9/11 at Ground Zero, where her performance of Amazing Grace was televised worldwide. Her performance that day is now part of the permanent collection at the 9/11 Museum.

Emi is passionate about developing new music and has premiered works by many of today’s leading composers. As a baroque flutist, in addition to her appointment as principal flute of the Handel and Haydn Society, Emi is a frequent guest artist with period ensembles including Tafelmusik, the American Classical Orchestra, Trinity Baroque Orchestra, and Juilliard415. She was the only flutist accepted to Juilliard’s inaugural Historical Performance class where she studied with Sandra Miller and worked with conductors including William Christie and Les Arts Florrisants, Christophe Hammer, Massaki Suzuki, Christopher Hogwood, and Nicholas McGegan.

Emi is currently on the faculty of the Juilliard School teaching Ear Training, the Bach Virtuosi Festival, and has taught on the faculty of the University of Buffalo. Emi was the first person to have graduated from Juilliard with Undergraduate and Graduate degrees with Scholastic Distinction in flute performance, as well as a second Graduate degree in Historical Performance as a Paul and Daisy Soros Fellow. Born in Japan and raised in London and Boston, Emi now resides in New York City.

Clay Zeller-Townson (baroque bassoon) is the founder of RUCKUS. He plays with the leading period instrument ensembles in North America including Tafelmusik Baroque Orchestra, Boston Baroque, Trinity Baroque Orchestra, American Bach Soloists, and Musica Angelica. He has given masterclasses at Eastman School of Music, UCLA, and University of Missouri.

Anthony Albrecht (baroque cello) is the creator and artistic director of the musical tours Bach to the Bush and Where Song Began. Known for his “dramatic flair” and “fluent and virtuosic” performances, Anthony is passionate about making classical music accessible to the 21st century in his native Australia and around the world.

Paul Holmes Morton (theorbo, baroque guitar, banjo) is a member of RUCKUS, The Chivalrous Crickets, and the Baroque Chamber Orchestra of Colorado. His recent recordings include Orphea by Majel Connery, Emi Ferguson’s Amour Cruel, and Arcangelo’s Circle by the Baroque Chamber Orchestra of Colorado. Paul is an active performer and recording artist of music ranging from historical resurrections to his own creations.

Evan Premo (bass) is a founding member of DeCoda. He is co-founder with his wife Mary Bonhag and artistic director of Scrag Mountain Music. He is the artistic director and founder of Beethoven and Banjos, a group that brings together folk and classical musicians for cross-genre concerts in the Upper Peninsula of Michigan. As a composer, he has been commissioned by the Pittsburgh Symphony Chamber Orchestra, River Town Duo, Aizuri Quartet, and International Society of Bassists.

Parker Ramsay (harpsichord, organ, harp) is the first prize winner of the Amsterdam International Organ Competition. He has performed at the Concertgebouw, Royal Albert Hall, Musée d’Orsay, Beijing National Performing Arts Center, Verizon Hall, and Carnegie Hall. He is the artistic director of the Louisville Harp Project and the Kithara series, with six premieres of new chamber works for harp. He is a featured writer for Van Magazine, Harping On, and the Washington Post. He is recording a forthcoming album of Bach’s Goldberg Variations arranged for harp.