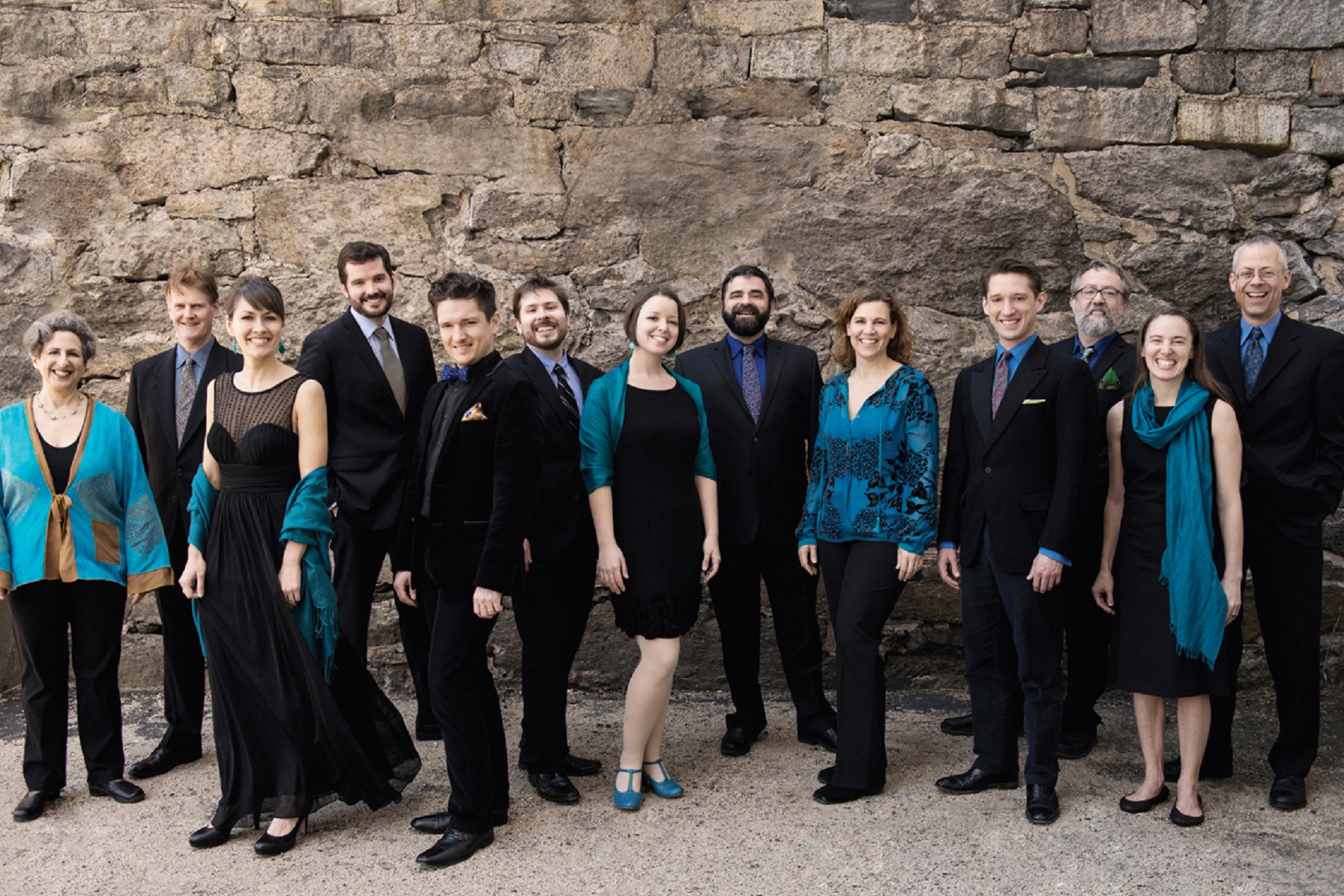 In a city that offers abundant holiday concerts, here’s one destined to stand out for its exuberance: Gramophone Award-winning Blue Heron is joined by a violin band and the spirited brass of the Dark Horse Consort. The program features works by the farseeing Praetorius, who combined the color of Italian music with the rich tradition of Lutheran chorales. A highlight will be settings of the advent hymn, Nun komm, der Heiden Heiland.

“At once cerebral, sensitive, and sensual, the ensemble exhibited perfect blend and balance in various configurations, all the more remarkable as the individual voices are by no means uniform…. Each contributed unique character and coloration.” —The Boston Musical Intelligencer

Blue Heron has been acclaimed by the Boston Globe as “one of the Boston music community’s indispensables” and hailed by Alex Ross in the New Yorker for its “expressive intensity.” Committed to vivid live performance informed by the study of original source materials and historical performance practices, the ensemble ranges over a wide repertory from plainchant to new music, with particular specialities in 15th-century Franco-Flemish polyphony and early 16th-century English sacred music.

Founded in 1999, Blue Heron presents a concert series in Cambridge, MA, and has appeared at the Boston Early Music Festival; in New York City at Music Before 1800, The Cloisters (Metropolitan Museum of Art), and the 92nd Street Y; at the Library of Congress, the National Gallery of Art, and Dumbarton Oaks in Washington, D.C.; at the Berkeley Early Music Festival; at Yale University; in Chicago, Cleveland, Kansas City, Milwaukee, Montreal, Pittsburgh, Philadelphia, Providence, St. Louis, San Luis Obispo, Seattle, and Vancouver; and in Cambridge and London, England. Blue Heron has been in residence at the Center for Early Music Studies at Boston University and at Boston College, and has enjoyed collaborations with A Far Cry, Dark Horse Consort, Les Délices, Parthenia, Piffaro, and Ensemble Plus Ultra. In 2015 the ensemble embarked on Ockeghem@600, a multi-season project to perform the complete works of Johannes Ockeghem (c. 1420-1497) and record all of his songs and motets. Volume I of the songs will be released in 2019. The project will wind up around 2021, in time to commemorate the composer’s circa-600th birthday.

Blue Heron’s first CD, featuring music by Guillaume Du Fay, was released in 2007. Between 2010 and 2017 the ensemble issued a five-CD series of Music from the Peterhouse Partbooks, including many world-premiere recordings of works copied c. 1540 for Canterbury Cathedral. The fifth CD was awarded the 2018 Gramophone Classical Music Award for Early Music and the five discs are now available as a boxed set entitled The Lost Music of Canterbury. Blue Heron’s recordings also include a CD of plainchant and polyphony to accompany Thomas Forrest Kelly’s book Capturing Music: The Story of Notation and the live recording Christmas in Medieval England. Jessie Ann Owens (UC Davis) and Blue Heron won the 2015 Noah Greenberg Award from the American Musicological Society to support a world premiere recording of Cipriano de Rore’s I madrigali a cinque voci (1542), to be released in the late summer of 2019.

Scott Metcalfe has gained wide recognition as one of North America’s leading specialists in music from the 15th through 17th centuries and beyond. Musical and artistic director of Blue Heron, he was also been music director of New York City’s Green Mountain Project (Jolle Greenleaf, artistic director) and a guest director of TENET (New York), the Handel & Haydn Society (Boston), Emmanuel Music (Boston), the Tudor Choir and Seattle Baroque, Pacific Baroque Orchestra (Vancouver, BC), Quire Cleveland, the Dryden Ensemble (Princeton, NJ), and Early Music America’s Young Performers Festival Ensemble. Metcalfe also enjoys a career as a baroque violinist, playing with Les Délices (dir. Debra Nagy), Montreal Baroque (dir. Eric Milnes), and other ensembles, and has directed the baroque orchestra at Oberlin Conservatory on several occasions. He taught vocal ensemble repertory and performance practice at Boston University from 2006 to 2015 and has also been a member of the visiting faculty at Harvard University and Boston Conservatory. He is the author of two chapters in a book about music at Peterhouse, and he has edited a motet by Francisco de Peñalosa and songs from the Leuven Chansonnier. He is at work on a new edition of the songs of Gilles Binchois. He holds degrees from Brown University and Harvard University.

The early music ensemble Dark Horse Consort is dedicated to unearthing the majestic late renaissance and early baroque repertory for brass instruments. Inspired by the bronze horse statues in Venice’s famed St. Mark’s Basilica, the ensemble attempts to recreate the glorious sounds of composers such as Giovanni Gabrieli, Claudio Monteverdi, and Heinrich Schütz. Dark Horse often expands to include vocalists and strings, which when combined recreates the rapturous kaleidoscope that was the sound of the early 17th-century instrumental ensemble.

Maps were disabled by the visitor on this site. Click to open the map in a new window.
Emi Ferguson & RUCKUS