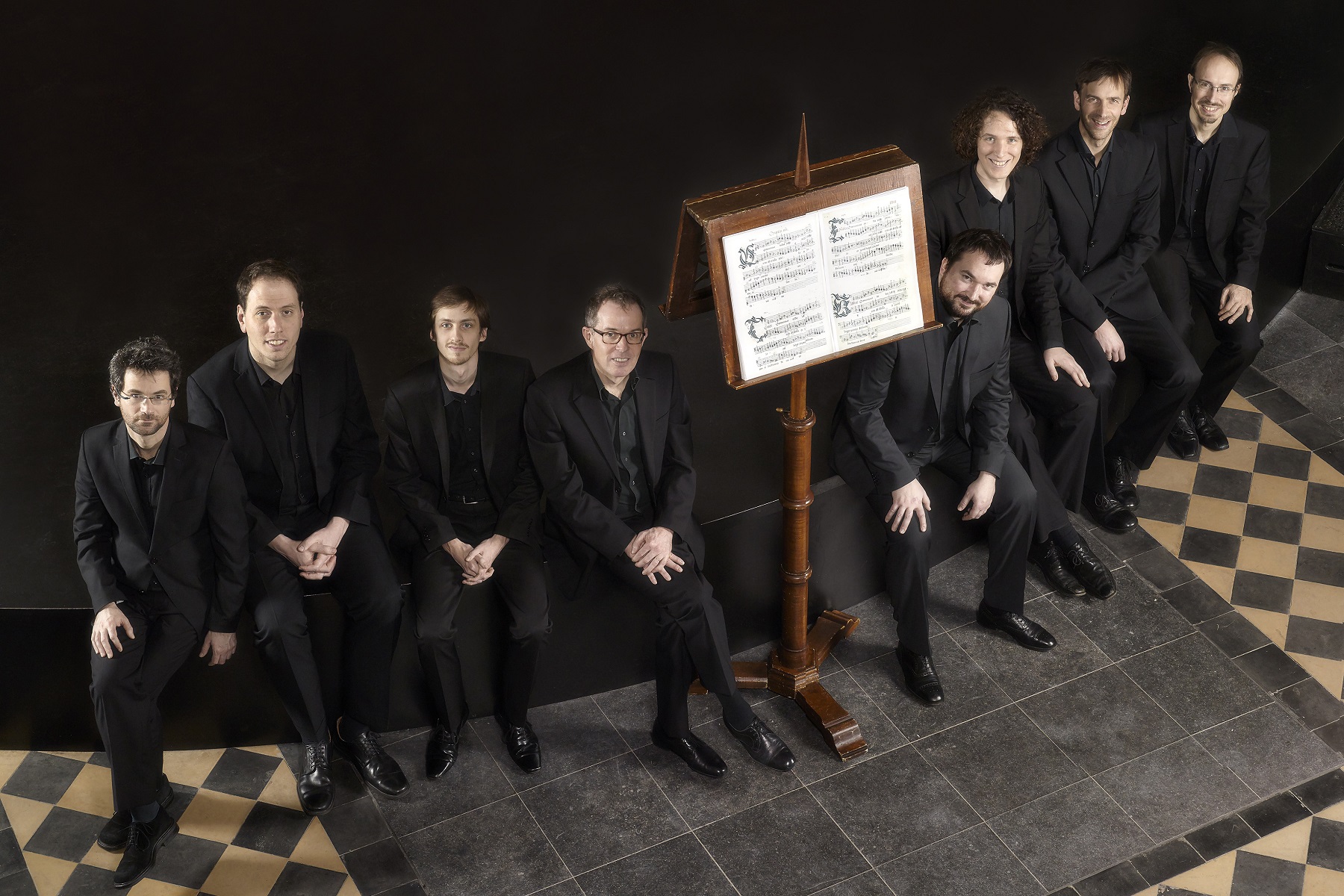 On his way to Ferrara to begin work at the Este chapel, Obrecht stopped at Innsbruck. There he heard a song to the Virgin Mary that would inspire his brilliant Missa Maria zart. He died the following year, leaving this late and radiant creation in the Flamboyant Gothic style. Singing from mensural notation scored in a large choirbook, the internationally acclaimed Cappella Pratensis soars, ever vibrant in its authenticity.

“Their singing was impeccably clean, in timbre and balance alike. But their emphasis was on the shape and flow of lines, more than on how the lines were put together. In repertoire so often thought to be all about the intellectual beauty of counterpoint, they drew out the more vital beauty of melody.” —Chicago Classical Review

The Dutch based vocal ensemble Cappella Pratensis, literally “Cappella des prés,” champions the music of Josquin Desprez and the polyphonists of the 15th and 16th centuries while also venturing into new music inspired by the polyphonic tradition. Founded in 1987, the group combines historically informed performance practice with inventive programs and original interpretations based on scholarly research and artistic insight. As in Josquin’s time, Cappella Pratensis performs from mensural notation presented in a partbook or choirbook, the latter placed on a large central music stand. This approach, together with attention to the chant origins of the polyphonic repertory, the modal system, the influence of solmization, and the linguistic basis, creates an intense engagement with the music.

Besides regular appearances at concert venues in the Netherlands and Belgium, Cappella Pratensis has performed at leading international festivals and concert series throughout Europe, North America and Japan. The group has been ensemble-in-residence at Harvard University, the Fondation Royaumont (France), and Boston University, giving courses, presenting concerts, and working with distinguished musicians. Most recently the ensemble has performed in prestigious series offered by Columbia University in New York and the Getty Museum in Los Angeles. Its CDs have met with critical acclaim and distinctions from the press (including the Diapason d’Or and the Prix Choc). Most recently Gramophone magazine recognized the ensemble’s recording of the Ockeghem Requiem as the best out of more than twenty recordings made over the last forty years.

Cappella Pratensis also passes on insights into vocal polyphony and performance from original notation—both among professionals and amateurs—through masterclasses, multi-media presentations, collaboration with institutions, an annual summer course as part of the Laus Polyphoniae festival in Antwerp, and training young singers within the group itself. Cappella Pratensis is ensemble-in-residence at the Alamire Foundation (University of Leuven) in connection with the digitization and valorization of the brilliant musical sources made in the workshops of the early 16th-century music scribe Petrus Alamire.

Cappella Pratensis is represented by David Middleton of middletonartsmanagement.com

Artistic director Stratton Bull studied voice at the Royal Conservatory in his native Toronto and subsequently at the Royal Conservatoire in The Hague with tenor Marius van Altena. He rounded off his studies with baritone Max van Egmond in Amsterdam. He has performed with leading ensembles in Europe and North America, including Tafelmusik Toronto, Hesperion XX, Cappella Pratensis, Cantus Cölln, and Capilla Flamenca. He has also worked as a soloist with such conductors as Andrew Parrott, Sigiswald Kuijken and Bernard Labadie.

Stratton Bull takes a special interest in the performance of 15th- and 16th-century polyphony from original notation. He has given frequent workshops and masterclasses using this approach to performance practice. Presently he holds teaching positions at the Schola Cantorum Basiliensis (Advanced Vocal Ensemble Studies Programme) and the Royal Conservatoire in The Hague (Performing Polyphony from Original Sources). At both institutions he is helping to create a new generation of singers who can take the performance of polyphony to the next level. Stratton Bull is also on the staff of the Alamire Foundation, International Study Centre for Music in the Low Countries (Katholieke Universiteit Leuven), in its House of Polyphony.

As artistic director of Cappella Pratensis since 2004, Stratton Bull has realized numerous projects for the concert stage and recordings. He was the artistic coordinator of several projects for the 500-year commemoration since the death of Hieronymus Bosch in 2016, including the premiere of the Missa Unitatis by the British composer Antony Pitts in collaboration with the Netherlands Chamber Choir and guest conductor Stephen Layton. Central to Mr Bull’s work with Cappella Pratensis is passing on his passion for performing polyphony. To this end he teaches an annual summer school as part of Laus Polyphoniae (Flanders Festival Antwerp), and has also led residencies at Harvard University (2004), and the Fondation Royaumont in France (2005-2007).

Maps were disabled by the visitor on this site. Click to open the map in a new window.
ACRONYM