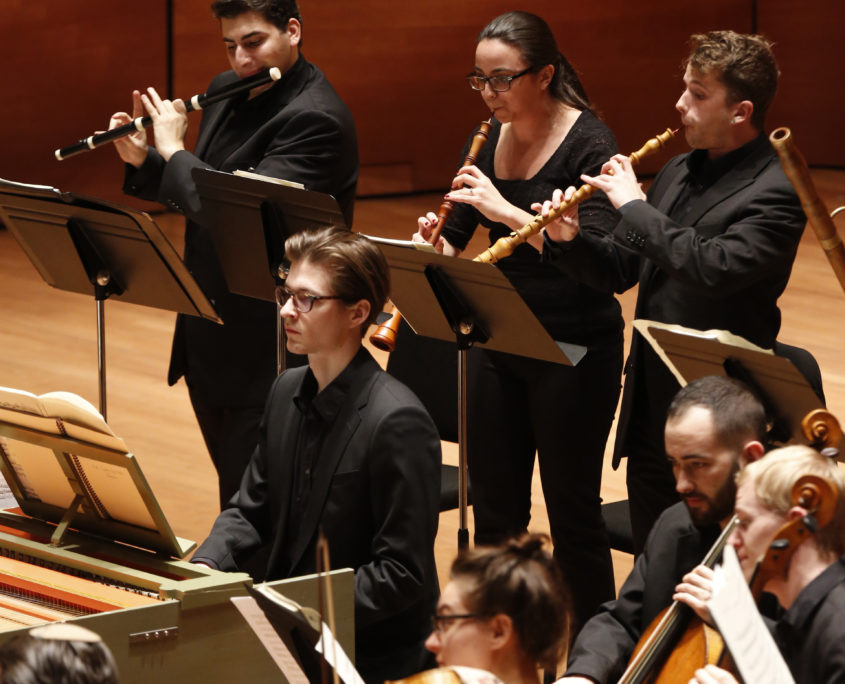 Hear the diabolical in Boccherini’s Sinfonia in D Minor, “La Casa del Diavolo,” the madness in Telemann’s Ouverture, “Burlesque de Quixotte,” and the enchantment in excerpts from Purcell’s The Fairy Queen. The charismatic British conductor Jonathan Cohen directs the extraordinary students of Juilliard415 as they offer yet more madness with pieces by Durante and Corelli.

“[Juilliard415’s] consummate deliberation was matched by their concentration and their absorption, tempered with enthusiasm and a sense of enjoyment. They were completely ‘into’ the music. It was a winning combination!”—DMS Review Blog

Since its founding in 2009, Juilliard415, the school’s principal period-instrument ensemble, has made significant contributions to musical life in New York and beyond, bringing major figures in the field of early music to lead performances of both rare and canonical works of the 17th and 18th centuries. The many distinguished guests who have led Juilliard415 include Harry Bicket, William Christie, the late Christopher Hogwood, Monica Huggett, Ton Koopman, Nicholas McGegan, Lars Ulrik Mortensen, Jordi Savall, and Masaaki Suzuki. Juilliard415 tours extensively in the US and abroad, with notable appearances at the Boston Early Music Festival, Leipzig Bachfest, and Utrecht Early Music Festival (where Juilliard was the first-ever conservatory in residence). With its frequent musical collaborator the Yale Institute of Sacred Music, the ensemble has played throughout Italy, Japan, Southeast Asia, the UK, India, and New Zealand. Juilliard415 has performed major oratorios and fully staged Baroque operas every year since its founding. Recent performances include Handel’s Agrippina and Radamisto, Bach’s Matthew and John Passions, Cavalli’s La Calisto, Charpentier’s Actéon with William Christie, and performances in the US and Holland of Bach’s Mass in B Minor conducted by Ton Koopman (a collaboration with the Royal Conservatoire of The Hague). The ensemble’s most recent international engagement was a ten-concert tour throughout New Zealand with Bach specialist Masaaki Suzuki. The 2017-18 season is notable for the Juilliard debuts of the rising conductor Jonathan Cohen and the Belgian vocal ensemble Vox Luminis, a side-by-side collaboration with Philharmonia Baroque in San Francisco, as well as return visits by Rachel Podger in a program of Telemann, William Christie leading Monteverdi’s Il ballo delle ingrate, a concert of music from Handel’s London under the direction of Robert Mealy, an all-Bach concert for the 500th anniversary of the Reformation with Maestro Suzuki, and the rare opportunity to see a fully-staged production of Rameau’s Hippolyte et Aricie with Stephen Stubbs conducting.

Jonathan Cohen is one of Britain’s finest young musicians. He has forged a remarkable career as a conductor, cellist and keyboardist. Well known for his passion and commitment to chamber music, Jonathan is equally at home in such diverse activities as baroque opera and the classical symphonic repertory. He is Artistic Director of Arcangelo, Associate Conductor of Les Arts Florissants, Artistic Director of Tetbury Festival, and Artistic Partner of the Saint Paul Chamber Orchestra. Jonathan becomes Music Director of Les Violons du Roy from the 2018/19 season and in the interim he is Music Director Designate.

In 2017/18, Jonathan returns to Les Violons du Roy, Saint Paul Chamber Orchestra, Budapest Festival Orchestra, Scottish Chamber Orchestra, and Glyndebourne Opera for Guilio Cesare. He makes his debut with Konzerthaus Orchester Berlin, Iceland Symphony Orchestra, and Orchestre Philharmonique de Liege. He has appearances with his ensemble, Arcangelo, that he founded in 2010; it strives to perform high quality and specially created projects. He has toured with Arcangelo to exceptional halls and festivals such as Wigmore Hall, London, Philharmonie Berlin, Kölner Philharmonie, Vienna Musikverein, Salzburg Festival, and Carnegie Hall New York. Other recent highlights include a European tour with Vilde Frang with concerts at Oslo Opera House and Tonhalle Zürich. In 2016, Jonathan conducted Arcangelo for their BBC Proms debut at the Sam Wanamaker Playhouse.

Arcangelo’s players are busy and much in demand in the recording studio, partnering with fine soloists such as Iestyn Davies (their disc Arias for Guadagni won the Recital Category at the 2012 Gramophone Awards), Anna Prohaska, and Christopher Purves on Hyperion Records. Their Mozart disc with Vilde Frang on Warner Classics (2015) reached No. 1 in the UK specialist classical chart and received an Echo Klassik Concert Award. Together with Scene! with Christiane Karg, Arcangelo’s disc Arias for Benucci with Matthew Rose was nominated for a 2016 International Opera Award. Their latest release is the disc CPE Bach Cello Concertos with Nicolas Altstaedt on Hyperion Records, which won the BBC Music Magazine Awards’ Concerto category in 2017.

Maps were disabled by the visitor on this site. Click to open the map in a new window.
Constantinople