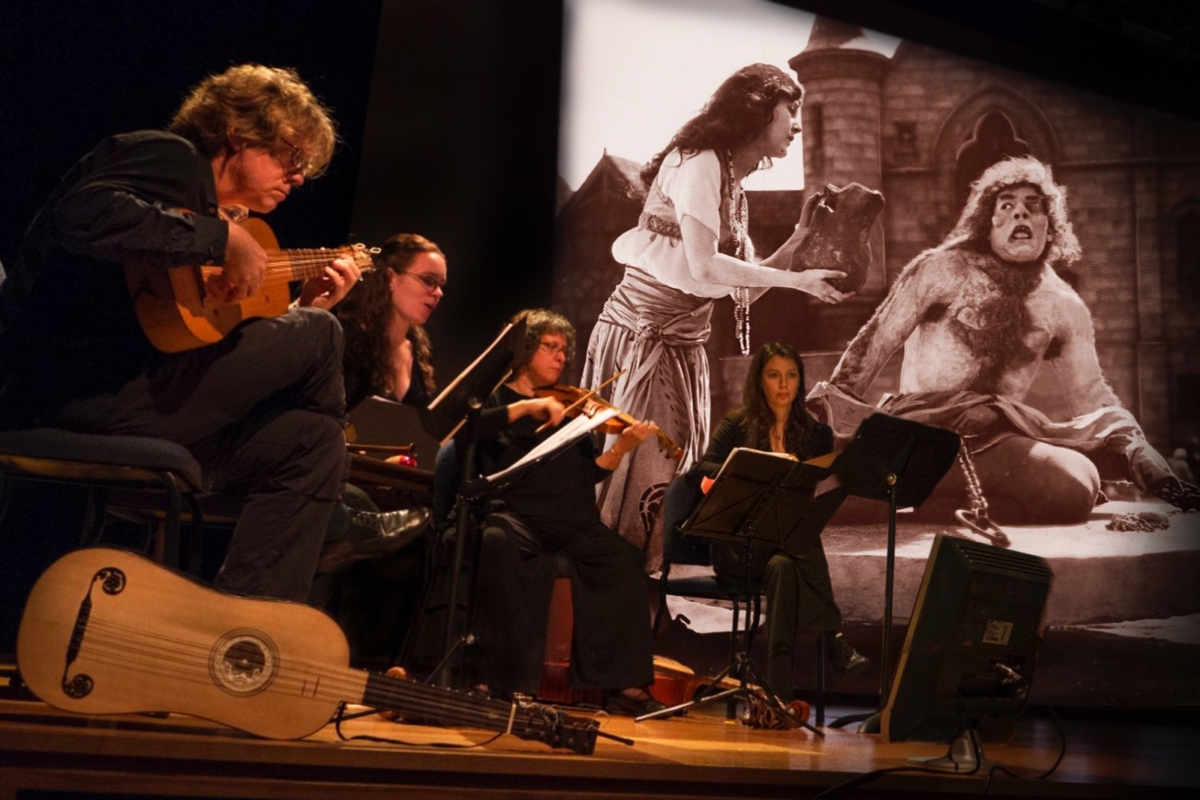 Prepare to be enchanted by the 1923 silent film, The Hunchback of Notre Dame, as Hesperus, an early music quartet based in Washington, D.C. and directed by Tina Chancey, provides a live soundtrack of French medieval music. Based on Victor Hugo’s novel of the same title, the film starring Lon Chaney is sumptuously set in turbulent 15th-century France, and Hesperus’s songs and dances dovetail with every overwrought gesture.

“The Hunchback of Notre Dame [was shown] to the strains of music by von Bingen, Machaut, Dufay and other composers … so that the great crowd scenes of medieval fairs and street fights played out to raucous medieval dance music and songs. The performance showed scholarship well used in the service of artistry and fun.”—Washington Post

**Some original tickets may be expired. Please email us if there are issues accessing the concert during the extended run, and we will replace the expired ticket.

Innovative, historically informed, and multi-cultural, Hesperus’s programs connect the rich musical past with curious 21st-century concertgoers. They offer early music soundtracks for such classic silent films as Robin Hood and Nosferatu, partnerships with theater, mime and dance, musical portraits of a single culture through time, fusions of European early music with American traditional styles, and single-genre early music programs from the medieval era to the American Civil War. Whatever the genre, Hesperus performs with creative energy, technical assurance, and a delicious sense of irony.

Tina Chancey is director of Hesperus. She plays medieval and traditional fiddles and viola da gamba on roots (world) music—from Sephardic and Irish to Machaut and Joni Mitchell. Her particular specialty is the pardessus de viole: she presented debut concerts at Carnegie Recital Hall and Kennedy Center and released five pardessus recordings. She also directed an International Pardessus Conference at the Boston Early Music Festival. A member of Trio Sefardi, she is a former member of Ensemble Toss the Feathers, the Folger Consort, the Ensemble for Early Music, the New York Renaissance Band, and Blackmore’s Night. Tina teaches, performs, improvises, produces recordings, composes and arranges, writes popular and scholarly articles, and directs workshops on playing by ear and improvisation. She has been given a Special Education Achievement Award by Early Music America and four Wammies for
best classical instrumentalist.

Barbara Hill is a Boston-based, Grammy-winning soloist and ensemble singer specializing in early and contemporary music. As a soloist, she has appeared with many prominent groups in Boston and Cambridge, MA: Musica Sacra, Masterworks Chorale, and Seven Times Salt. She sings in the Old North Festival Chorus (Marblehead, MA), and is the soprano cantor at the Cathedral of the Holy Cross, Boston. As an ensemble member, she performs with the Grammy-winning ensemble The Crossing (Philadelphia, PA), Emmanuel Music (Boston, MA), Ensemble Altera (Providence, RI), and Cappella Clausura (Newton, MA). Her recent highlights were premiering Julia Wolfe’s Fire in my mouth with The Crossing and the NY Philharmonic in January, 2019, recording Heidi Breyer’s Requiem for the Common Man in 2021, and joining the 2021 Cambridge Christmas Revels as a featured soloist and ensemble member. Barbara is a member of Beyond Artists and donates a portion of her artistic earnings to organizations such as 350.org (beyondartists.com).

Brian Kay is a modern-day troubadour. He is the first Artistic Leadership Fellow of Apollo’s Fire and in 2019, he won a Grammy Award for his work on their Songs of Orpheus recording. He has performed throughout the world at venues such as the National Concert Hall of Dublin, Belfast Castle (Ireland), Carnegie Hall, and the Kennedy Center. He is a multi-instrumentalist, songwriter, arranger, traditional and historical music specialist, poet, painter, and avid proponent of meditation. Brian was the first featured artist in EMAg’s column “Early To Rise” and was the first of three soloists to be featured in the Lute Society of America’s Emerging Artist Series. He is a core member of Twa Corbies and Apollo’s Fire, and regularly performs with Hesperus, The Folger Consort, Early Music Access Project, Trio Sefardi and is a founding member of the early music improvisation group, Divisio.

A versatile multi-instrumentalist, Dan Meyers has developed a reputation as a flexible and engaging performer of both classical and folk music. His credits range from headlining a concert series in honor of Pete Seeger at the Newport Folk Festival to playing Renaissance instruments on Broadway for Shakespeare’s Globe Theatre Company. He is a founding member of the early music/folk crossover group Seven Times Salt, and also performs regularly with the 7 Hills Renaissance Wind Band and the medieval music ensemble, Meravelha. In recent seasons he has performed with The Folger Consort, The Newberry Consort, The Boston Shawm and Sackbut Ensemble, Early Music New York, Amherst Early Music, The 21st Century Consort, In Stile Moderno, and the Cambridge Revels. He teaches early wind instruments for the Five Colleges Early Music Program. He also performs southern Italian folk music with the award-winning band, Newpoli, and traditional Irish music with the bands, Ulster Landing and Ishna.

Maps were disabled by the visitor on this site. Click to open the map in a new window.
Ars Lyrica Houston