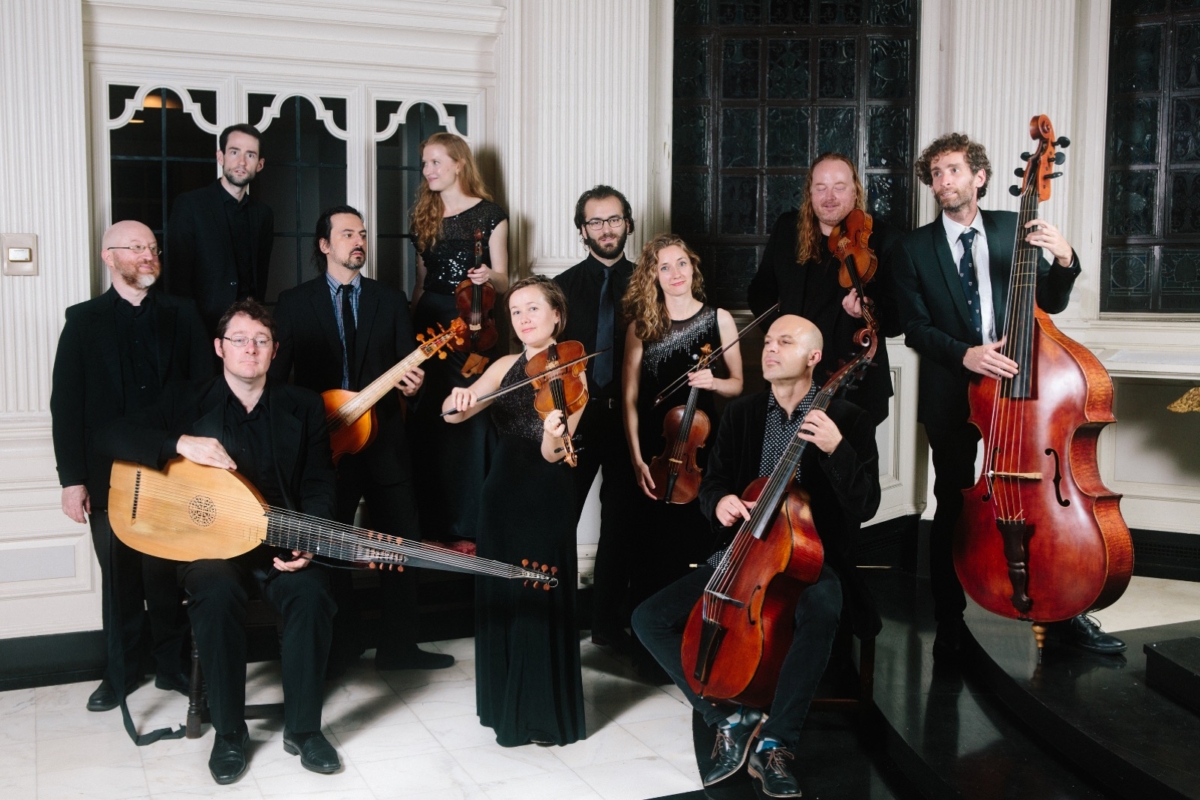 Ad Astra: To the Stars

ACRONYM, the baroque big band, promises a joyful, virtuosic performance of music composed after the Thirty Years War, which ended in 1648. Suffering through decades of death and cultural stagnation that afflicted the whole of Central Europe, musicians gratefully began working again. Ad Astra features exuberant compositions by Valentini, Bertali, Schmelzer, Biber, Rosenmuller, and others, that reflect the renewed energy and a spirit of experimentation following the Peace of Westphalia.

“The program was a mélange of inventive 17th-century works employing novel techniques. ACRONYM’s consistently fine intonation and exceptional ensemble were nothing short of amazing all evening.”—Cleveland Classical

This concert is sponsored, in part, by Roger and Whitney Bagnall.

The virtual program becomes available on Sunday, February 20, 4 p.m. ET, followed by a live Q&A, and remains viewable until March 6.

The baroque band ACRONYM, formed in 2012, is an “outstanding young early-music string ensemble” (New Yorker) dedicated to giving modern premieres of the wildest instrumental music of the seventeenth century. Playing with “consummate style, grace, and unity of spirit” (New York Times), the group has released ten critically acclaimed CDs since 2014. Recent projects include the first modern performances and recordings of works by Biber, Rosenmüller, Capricornus, and more. The band’s most recent album, Cantica Obsoleta (2020), features the modern premiere recordings of nearly lost works from Sweden’s Düben Collection. The Boston Globe raves, “this musical time-capsule offers enough resplendence to transport anyone.”

Doug Balliett is a composer, instrumentalist and poet based in New York City. The New York Times has described his poetry as “brilliant and witty” (Clytie and the Sun), his bass playing as “elegant” (Shawn Jaeger’s In Old Virginny), and his compositions as “vivid, emotive, with contemporary twists” (Actaeon). Identified as an important and active voice for his generation, Doug has been professor of baroque bass and violone at The Juilliard School since 2017.

Praised for his versatility in the New York Times, Kivie Cahn-Lipman is the founder and cellist of Makaris, a founding gambist of LeStrange Viols and Science Ficta, and the founder and lironist of ACRONYM. He has recorded more than fifty solo and ensemble albums on over a dozen record labels, and his recording of J. S. Bach’s Cello Suites was hailed for its “eloquent performances,” “fresh thinking,” and “energy and zeal” (The Strad). Kivie is an assistant professor of cello at Youngstown State University’s Dana School of Music.

Cellist Paul Dwyer is fortunate to have a rich musical life playing both historical and modern cello. He is a founding member of the Diderot String Quartet and ACRONYM, and loves to play chamber music and collaborate with young composers. He is assistant principal cello of Lyric Opera of Chicago and has taught at Notre Dame University.

Elliot Figg is a keyboardist, conductor, and composer from Dallas. He is a graduate of the Historical Performance Program at The Juilliard School where he studied harpsichord with Kenneth Weiss; he also studied with Arthur Haas at the Yale School of Music. Elliot is an active member of several New York-based early music and contemporary ensembles, including ACRONYM, Ruckus, and House of Time.

Over the last decade, Edwin Huizinga has crossed many borders and boundaries around the world as an artist, finding new and unique ways to connect with audiences. Performing in different genres and on different stages and platforms, he always strives to commit and connect with the community. Huizinga is a founding member of ACRONYM, a world-renowned baroque ensemble, and Fire & Grace, which gives him the opportunity to share modern baroque premieres, new arrangements, and compositions with the musical community.

John Lenti is a specialist in music of the 17th century and has made basso continuo improvisation on lute, theorbo, and baroque guitar the cornerstone of his career. He performs with the Metropolitan Opera Orchestra, many other orchestras, and with vocal and instrumental chamber groups of various sizes. He also gives solo and duo recitals. His work has taken him to countless festivals and lots of fun venues. John studied lute with Nigel North, Jacob Heringman, and Elizabeth Kenny. He lives in Seattle.

Loren Ludwig is a performer/scholar based in Baltimore. Praised for his “outstanding” playing by the Washington Post, Loren is a co-founder of LeStrange Viols and Science Ficta. He performs with ACRONYM and numerous ensembles specializing in 16th and 17th century music in the US and abroad. Loren received a PhD in musicology from the University of Virginia and his work has been supported by the Fulbright Program, the Andrew W. Mellon Foundation, and the American Musicological Society.

Violist Kyle Miller made his concerto debut in 2005 with the Reading (Pennsylvania) Symphony Orchestra as “the dog” in P. D. Q. Bach’s Canine Cantata, Wachet Arf! After that watershed performance, Kyle went on to study at the New England Conservatory, the Eastman School of Music, and The Juilliard School. A member of Handel + Haydn Society, the Knights, New York Baroque Incorporated, and Tafelmusik Baroque Orchestra.

Violinist Johanna Novom appears with ensembles internationally as a soloist, principal, chamber, and orchestral musician.  She is a member of Diderot String Quartet and ACRONYM, and has been concertmaster of Apollo’s Fire and principal at Washington National Cathedral Baroque Orchestra. Johanna also performs with the Boston Early Music Festival Orchestra, Trinity Wall Street Baroque Orchestra, Tafelmusik, Handel + Haydn Society, and New York Baroque Incorporated, among others.  Johanna holds a master’s degree in Historical Performance from Oberlin Conservatory, and was a 2008 first-prize winner of the American Bach Soloists’ International Young Artists Competition.

Adriane Post’s baroque violin playing has been described as “exquisite” by the New York Times. Sought after as leader, collaborator, and soloist in ensembles across the US, she is a founding member of ACRONYM and Diderot String Quartet, and has served as concertmaster of the Washington National Cathedral Orchestra, associate principal of Apollo’s Fire, soloist and collaborator with Four Nations Ensemble, and guest concertmaster with groups such as Seraphic Fire and NY Baroque Inc. A tenured member of Handel + Haydn Society, Adriane also performs regularly with Trinity Wall Street Baroque Orchestra. She has appeared with The English Concert directed by Harry Bicket, and as a guest performer with Les Délices, Chatham Baroque, and Tenet. She will serve as Leader of Indianapolis Baroque Orchestra starting fall 2023.

Beth Wenstrom’s playing has been praised for its “vitality and eloquent phrasing, as well as agility” (The Strad).  As a soloist and concertmaster, she has performed with Trinity Wall Street Baroque Orchestra, Sebastian Chamber Players, New York Baroque Incorporated, and Quodlibet Ensemble. She has appeared in Apollo’s Fire as well as the Boston Early Music Festival Orchestra and The Orchestra of the Age of Enlightenment. Beth is a regular guest conductor with the Oberlin Baroque Orchestra, leading from the violin, as well as the string coach for SUNY Stony Brook’s baroque ensemble.

Maps were disabled by the visitor on this site. Click to open the map in a new window.
Hesperus