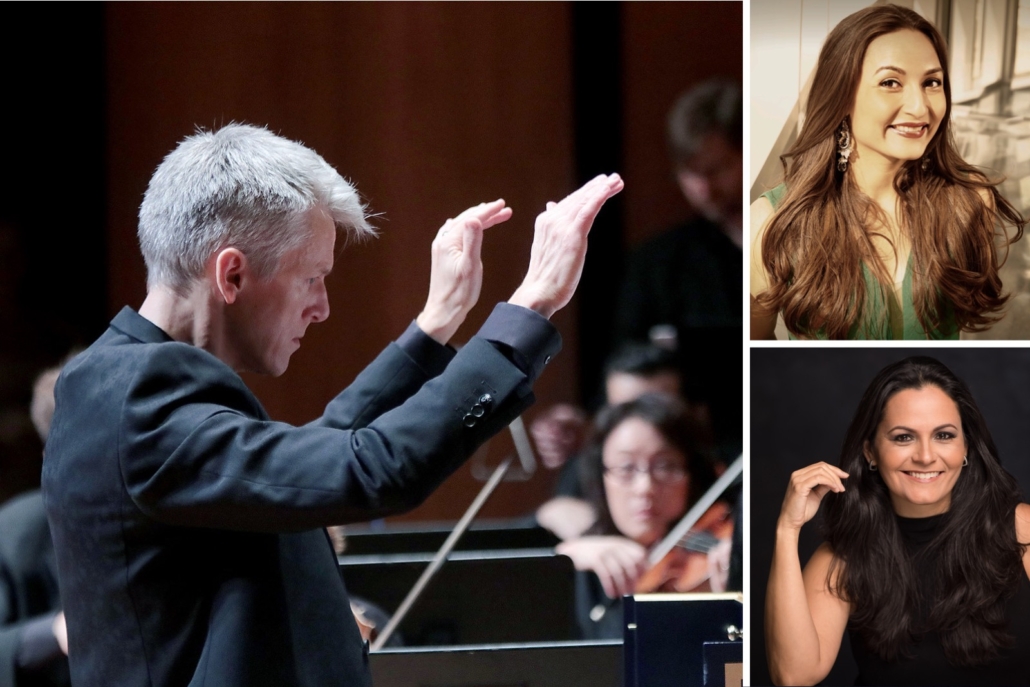 What better way to enjoy the holidays than with Ars Lyrica Houston, the celebrated ensemble from Texas, directed by Matthew Dirst and featuring the singers Camille Ortiz and Cecilia Duarte. The festive, toe-tapping Crossing Borders contains western-hemisphere music that shows the rich flowering of Hispanic culture during the 16th through 18th centuries. The vocalists and instrumentalists perform villancicos, romances, and a wealth of other compositions by Roque Ceruti, José Duran, Antonio de Salazar, Manuel Joseph Duron, and others.

“Matthew Dirst, artistic director of Ars Lyrica Houston, has an unerring ability to put together programs that are musically rich and varied, framed in fascinating historical context, and vividly brought to life by the finest guest soloists and musicians.”—Arts & Culture Texas

The virtual program becomes available on Sunday, December 26, 4 p.m. ET, followed by a live Q&A, and remains viewable until January 9.

Founded in 1998 by harpsichordist and conductor Matthew Dirst, Ars Lyrica Houston presents a diverse array of music in its original context while creating connections to contemporary life. Intelligent programming features neglected gems alongside familiar masterworks while developing their dramatic potential, emotional resonance, and expressive power, especially in the realm of early music. Its local subscription series, according to the Houston Chronicle, “sets the agenda” for early music in Houston. Ars Lyrica appears regularly at international festivals and concert series because of its distinctive focus. Its pioneering efforts in the field of authentic performance have won international acclaim, including a Grammy nomination (Best Opera, 2011) for J. A. Hasse’s Marc Antonio e Cleopatra.

Ars Lyrica Artistic Director Matthew Dirst was recently described by the Washington Post as an “efficient, extremely precise conductor who has an ear for detail.” Dirst’s stylish harpsichord playing and conducting of Ars Lyrica Houston’s performances and recordings have won wide acclaim. He is the first American musician to win major international prizes in both organ and harpsichord, including the American Guild of Organists’ National Young Artist Competition and the Warsaw International Harpsichord Competition. Equally active as a scholar and organist, Dirst is Professor of Music at the Moores School of Music, University of Houston, and organist at St Philip Presbyterian Church in Houston. His publications include Engaging Bach: The Keyboard Legacy from Marpurg to Mendelssohn (Cambridge University Press, 2012), Bach and the Organ (University of Illinois Press, 2016), and Learned Play: Bach’s Art of Fugue and Musical Offering (Oxford University Press, forthcoming 2022).

Puerto Rican soprano Camille Ortiz is internationally recognized for compelling performances of operatic and concert repertory. In addition to the present program, her 2021/22 season includes recitals and masterclasses of Latin American art song across the United States, Pamina in The Magic Flute at Eugene Opera, and a debut with Boston Baroque as Oriana in Handel’s Amadigi di Gaula. She has appeared with Opera Orlando, Gulfshore Opera, Magic City Opera, Philharmonia Baroque Orchestra, Ars Lyrica Houston, the Naples Philharmonic, the Dallas Bach Society, the Orchestra of New Spain, the Festival of the Aegean in Greece, and the Orchestra da Camera Fiorentina (John Rutter conducting). She appears in an acclaimed recording of Rameau’s Le temple de la gloire with Philharmonia Baroque (conducted by Nicholas McGegan), for which she was named “the stand-out” of the recording by BBC Music Magazine. Ms. Ortiz is currently Assistant Professor of Voice at the University of Oregon’s School of Music and Dance.

Cecilia Duarte is a versatile singer who specializes in early music and contemporary opera. Praised recently by the New York Times as “a creamy voiced mezzo-soprano,” she is a soloist on a Grammy-winning recording of the complete choral works of Maurice Duruflé. Role premieres include Renata in the mariachi opera Cruzar la Cara de la Luna and its prequel, El Milagro del Recuerdo, both for Houston Grand Opera. Also for Houston Grand Opera she has performed Alma in the new web series Star Cross’d, Harriet/First Responder in After the Storm, and Alicia in Some Light Emerges. Other operatic roles include Maria in Maria de Buenos Aires, Loma Williams in Cold Sassy Tree, Sarelda in The Inspector, and Tituba in The Crucible. She has sung with Chicago Lyric Opera, San Diego Opera, El Paso Opera, and New York City Opera. Cecilia is a regular singer with Ars Lyrica Houston and Mercury Houston, the Kaleidoscope Vocal Ensemble, and most recently, she debuted with the Boston Early Music Festival. Future engagements include Handel’s Messiah in a Spanish language adaptation with Bach Collegium San Diego, and world premieres of music with ROCO Houston and Apollo Chamber Players. Soon she will release her first solo album, Reencuentros with Reference Recordings.

Stephanie Noori is a multi-instrumentalist who has performed nationally and internationally and is fluent in a variety of musical styles. She is an active soloist and chamber musician on violin, viola, and viola da gamba, and a specialist in early music performance. She acquired her Bachelor of Music from the University of North Texas and Master of Music from Indiana University. Stephanie now plays with a diverse array of groups including La Follia, Austin Troubadours, Texas Early Music Project, Ars Lyrica, Mountainside Baroque, Austin Baroque Orchestra (for which she is concertmaster), and is a founding member of the chamber ensemble Les Touches.

Violinist Maria Lin is from Rockland County, New York, and has degrees from the New England Conservatory and the Eastman School of Music.  She has performed in numerous music festivals including Tanglewood, Spoleto, Grand Teton, and has performed as soloist with the Hudson Valley Philharmonic and at Weill Recital Hall.  She has been on the faculty of the Interlochen Arts Center, and taught and free-lanced in the Northeast for many years before moving to Houston. In Houston she plays with the Houston Grand Opera, Mercury, Bach Society, and Ars Lyrica. She plays on a violin made by Giovanni Baptista Gabrieli in 1770.

Praised by critics for his “flawless lightness and grace,” Eric Smith has been called “the very model of an elegant cellist” (Dallas Morning News), and his performances have been described as “nuanced, thoughtful, and technically sound” (Theater Jones). Eric has concertized on Baroque cello and viola da gamba throughout the U.S., Mexico, South America, and Europe, and with some of the nation’s leading period instrument ensembles. In addition to serving as Artistic Director of the American Baroque Opera Co., Eric collaborates with groups including Ars Lyrica Houston, La Follia Austin Baroque, and Bach Society of Houston.

Spanish born percussionist Jesús Pacheco obtained his bachelor’s degree in Percussion Performance from the Conservatory in Seville. During his time in Europe, he studied with percussionists Pedro Estevan and David Mayoral. He performed in a number of ensembles such as the Real Sinfónica de Sevilla and the Bachakademie in Stuttgart. A versatile percussionist, Jesús moved to Houston ten years ago and is currently Music Director at Strake Jesuit College Preparatory. In addition to teaching, Jesús leads an active life as a performer in Texas, playing with Bach Society, Mercury, and Houston Early Music.

Grammy-nominated Richard Savino has an extensive discography, including the only recordings of Mauro Giuliani’s Op. 30 Concerto for Guitar and Orchestra and Boccherini’s Symphonia a grandé orchestra con chitarra on a period instrument with original orchestrations and no cuts. He has toured internationally and has been a featured guest on numerous national and international television and radio programs. From 1986 to 1998, Richard directed the CSU Summer Arts Guitar and Lute Institute. Presently he is director of El Mundo and Professor of Music at Sacramento State University and the San Francisco Conservatory of Music. He is also on the faculty of UC Berkeley.

Maps were disabled by the visitor on this site. Click to open the map in a new window.
Juilliard415 with Robert Mealy