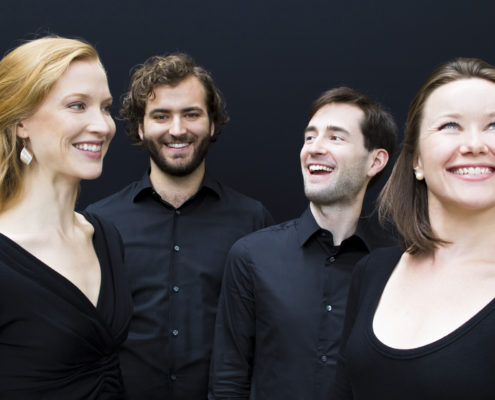 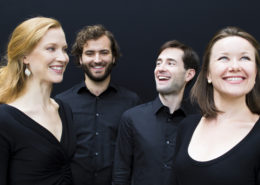 Bach to the Future: The Legacy of the Fugue

There will be a reception in the lobby of the Kosciuszko Foundation featuring complimentary wine from Germany, the country featured in Diderot’s program.

Johann Sebastian Bach’s music had fallen into obscurity until Felix Mendelssohn’s visionary 1829 revival of the St. Matthew Passion. Mendelssohn continued to honor Bach by embracing the “antiquated” fugue in his own works. The vibrant Diderot String Quartet plays Bach’s Art of Fugue, Mendelssohn’s Fugue in E-flat Major, and his fugue-filled String Quartet No. 2, Op. 13.

“I caught afternoon performances, from Tuesday through Thursday, by the Diderot String Quartet, anchored by the cellist Paul Dwyer, who had led off the festival with a peripatetic survey of Bach’s cello suites.” —New York Times

Diderot String Quartet, named after the prominent18th-century French philosopher and Boccherini enthusiast Denis Diderot, came together in 2012 in New York City. The four musicians first met at Oberlin Conservatory and The Juilliard School. Sharing a background in historical performance and a passion for the string quartet genre, they quickly discovered the irresistible thrill of exploring the repertory on period instruments. The Diderot String Quartet, featured in the Chamber Music America article, “New Voices in Old Music,” brings a fresh approach to both familiar and lesser known works of the 18th and 19th centuries. In its 2016/17 season, DSQ appears on the following concert series: Music Before 1800 (NYC), Renaissance & Baroque (Pittsburgh), St. Cecilia Music Series (Austin, TX), and Early Music at St. James (Lancaster, PA). The quartet also enters a third year as a resident ensemble at Holy Trinity Lutheran Church (NYC) and a second year as Quartet in Residence at the Washington National Cathedral. Diderot String Quartet was awarded a two-week residency at Aldeburgh Music in the UK. Other recent events include the premiere of DSQ’s first-ever commissioned work, Small Infinities by award-winning composer Lembit Beecher, and performances at the Metropolitan Museum of Art, the Cambridge Society of Early Music, and Kerrytown Concert House (Ann Arbor, MI).

Tenor Nils Neubert maintains an active career in oratorio, opera, and recital, and is a frequent guest at music festivals in the US and Europe. He holds degrees from The Juilliard School and Columbia University, and is currently completing a doctorate at the CUNY Graduate Center. Mr. Neubert teaches German diction at The Juilliard School, Manhattan School of Music, Mannes College the New School for Music, and at the Music Academy of the West. He has previously served on the faculties at William Paterson University and Kaufman Music Center. Born and raised in Hamburg, Germany, Nils Neubert lives in New York City together with his wife, pianist Yuri Kim. www.nilsneubert.com.

Cellist Paul Dwyer was born in Munster, Indiana, but spent the most formative years of his life (according to Freud) in Vienna, where he decided to play the double bass, but was told he’s too small. At age eight his family moved to Munich, where Paul spent most of his time playing soccer, running subversive school newspapers and transcribing Metallica songs for a heavy metal cello quartet he formed with his best friends. Dwyer followed his roots back to the American Midwest for college, studying at the Oberlin Conservatory (B.M. ’07) and the University of Michigan (M.M. ’08; D.M.A. ’12), where he was the recipient of a Javits Fellowship and Presser Award. Then he spent a year in Amsterdam as a Fulbright Fellow studying new music with Frances-Marie Uitti and baroque cello with Anner Byslma. In 2013, he completed additional graduate studies in the Historical Performance department of The Juilliard School. Paul is fortunate to have a rich musical life playing both historical and modern cello. He loves playing chamber music and collaborating with young composers. He is a founding member of the DSQ and ACRONYM, and plays with ensembles such as Trinity Wall Street Baroque Orchestra, the Handel & Haydn Society Orchestra, and House of Time. In the fall of 2015, he was appointed Assistant Principal cello of Lyric Opera of Chicago. He and his wife, Adriane, live in Brooklyn.

Violist Kyle Miller made his concerto debut in 2005 with the Reading (Pennsylvania) Symphony Orchestra as “the dog” in P.D.Q. Bach’s Canine Cantata, Wachet Arf! Since that day, Kyle has gone on to study at the New England Conservatory, the Eastman School of Music, and The Juilliard School, where he earned master’s degrees in both viola performance and historical performance. Highlights from Kyle’s studies include concerts in England, France, Germany, Italy, Japan, Myanmar, the Netherlands, and Singapore. Kyle’s home base is New York City, and he freelances both in the Big Apple and abroad. A founding member of ACRONYM, Diderot String Quartet, and New York Baroque Incorporated (with whom Kyle performed Telemann’s solo viola concerto and J.S. Bach’s sixth Brandenburg Concerto alongside Monica Huggett), Kyle also has appeared in concert with Apollo’s Fire, the Bach Players of Holy Trinity, Clarion Orchestra, the English Concert, House of Time, Quodlibet Ensemble, the Sebastians, Tafelmusik Baroque Orchestra, and Trinity Baroque Orchestra. Kyle was recently selected to be an English Concert American Fellow, and he has performed at the Carmel Bach Festival. In his spare time, Kyle enjoys eating freshly baked cookies.

Violinist Johanna Novom appears as a soloist, principal, chamber, and orchestral musician with period ensembles across the US. A first-prize winner of the American Bach Soloists’ International Young Artists Competition, Johanna has held the position of Associate Concertmaster of Apollo’s Fire since the completion of her master’s degree at Oberlin Conservatory. She also performs with groups such as the Trinity Wall Street Baroque Orchestra, the Boston Early Music Festival Orchestra, American Bach Soloists, Clarion, Concert Royal, the Washington Bach Consort, ACRONYM, Chatham Baroque, the Sebastian Chamber Players, Spire Ensemble, Opera Lafayette, New York Baroque Incorporated, and the Washington National Cathedral Orchestra. Recent and upcoming festival engagements include the Boston Early Music Festival, Carmel Bach Festival, Tanglewood, and the BBC Proms Festival. Johanna has performed in magnificent concert halls and churches throughout Europe and North America—recently in New York’s Weill Recital Hall at Carnegie Hall, London’s Wigmore Hall, Amsterdam’s Concertgebow, Rome’s Santa Maria Basilica, the Teatro Royal of Madrid, and the Grand Théâtre de Bordeaux. Johanna was a 2010-11 fellowship member of the Yale Baroque Ensemble directed by Robert Mealy. She is based in Brooklyn, NY, where she is a founding member of the Diderot String Quartet on period instruments. She can be heard in recordings with a variety of ensembles on labels such as Avie Records, New Focus Records, and Deutsche Grammaphon.

Violinist Adriane Post grew up in Charlotte, VT, where she learned to love playing string quartets by forming a group with her best friends at age eleven. She was won over by the baroque violin by playing with friends at Oberlin (two of whom are now members of Diderot String Quartet), and was pleased to discover that her great-grandmother’s violin was well suited to gut strings. Since then, she has played with many of the best period instrument ensembles in the US and has been described as one of North America’s “brightest and best” by Early Music America (fall 2012). Adriane can be heard as leader of Washington National Cathedral Baroque Orchestra, where Diderot String Quartet is the newly appointed ensemble in residence, as co-concertmaster at New Trinity Baroque, as core member of Apollo’s Fire, as regular with Handel & Haydn Society, Trinity Wall Street Baroque Orchestra, and with groups across the US. Interesting performances in the 2014-15 season have included appearances at Spoleto USA, Tanglewood, The BBC Proms, Passaggi Musicali di Toscana, and Carmel Bach Festival. A fellow with English Concert, Adriane has performed with Les Arts Florissants and William Christie in Thiré, France, and as concertmaster for Nicolas McGegan and Jordi Savall with Juilliard 415. Adriane received her BM from Oberlin Conservatory and her MM from The Juilliard School’s Historical Performance program. Always a proud Vermonter, Adriane admits to residing happily in Brooklyn, NY, with her husband Paul Dwyer, where there are no trees to climb, but where they do make a lot of waffles….

Maps were disabled by the visitor on this site. Click to open the map in a new window.
Elizabeth Blumenstock, Beiliang Zhu, Aya Hamada