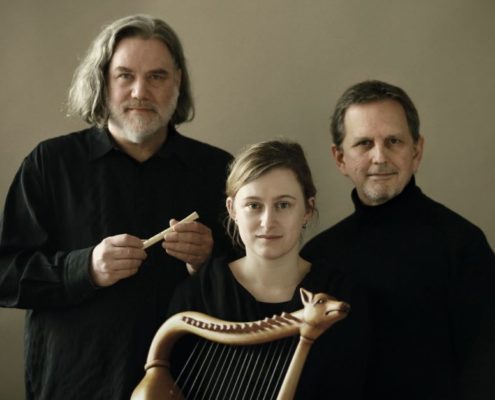 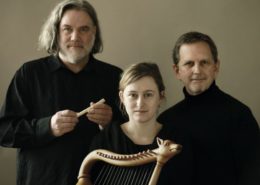 Medieval monks sang primarily the required liturgical music of the Church, but they also knew and set to song the pagan tales of the ancient world that had been preserved in the libraries at the great cathedrals. The ever adventurous Benjamin Bagby has reconstructed from fragments these 9th- through 12th-century songs about the exploits of long abandoned Roman gods and heroes.

“Benjamin Bagby’s peculiar genius has less to do with virtuosity than with daring and imagination. His art is speculative reconstruction, and … his results have often been startlingly different from those of his peers, mainly because he is willing to take leaps that others are not.” —New York Times

Sequentia is among world’s most respected and innovative ensembles for medieval music. Under the direction of Benjamin Bagby, Sequentia can look back on almost forty years of international concert tours, a comprehensive discography of more than thirty recordings spanning the entire Middle Ages (including the complete works of Hildegard von Bingen), film and television productions of medieval music drama, and a new generation of young performers trained in professional courses given by members of the ensemble.

Sequentia, co-founded by Bagby and the late Barbara Thornton, has performed throughout Western and Eastern Europe, the Americas, India, the Middle East, East Asia, Africa, and Australia, and has received numerous prizes (including a Disque d’Or, several Diapasons d’Or, two Edison Prizes, the Deutsche Schallplattenpreis and a Grammy nomination) for many of its thirty recordings on the BMG/Deutsche Harmonia Mundi (SONY), Raumklang, and Marc Aurel Edition labels. The most recent CD releases include reconstructions of music from lost oral traditions of the Middle Ages (The Lost Songs Project), including 9th- and 10th-century Germanic songs for the Apocalypse (Fragments for the End of Time), the ensemble’s acclaimed program of music from the Icelandic Edda: The Rheingold Curse, as well as the earliest known European songs (Lost Songs of a Rhineland Harper), and medieval liturgical chant (Chant Wars, a co-production with the Paris-based ensemble Dialogos). Giving performances all over the world, Sequentia has created over seventy innovative concert programs that encompass the entire spectrum of medieval music. In addition, the performers have created many music-theater projects such as Hildegard von Bingen’s Ordo Virtutum, the Cividale Planctus Marie, the Bordesholmer Marienklage, Heinrich von Meissen’s Frauenleich, and the medieval Icelandic Edda. In 2013 Sequentia released on the SONY label the final CD of Hildegard von Bingen’s complete works: Celestial Hierarchy, which immediately received a Diapason d’Or. The complete works of Hildegard was re-issued by SONY in 2016. The work of the ensemble is divided between a small touring ensemble of vocal and instrumental soloists and a larger ensemble of voices for special performance projects. After many years based in Cologne, Germany, Sequentia’s home was re-established in Paris in 2003. www.sequentia.org

About the Lost Songs Project:

In the mid-1980s, Benjamin Bagby began his work on the reconstruction of the Beowulf epic, and since then he has been deeply involved with those European musical repertoires which have literally “vanished,” for which the surviving manuscripts do not provide enough information for a reliable transcription. Aided by musicologists and philologists (such as Sam Barrett and Peter Dronke of Cambridge University, Jan Ziolkowski of Harvard University, and Heimir Pálsson of Uppsala University), Bagby has built on his work with Beowulf to reconstruct the music of other early sources: Anglo-Saxon texts (such as Deor and the Wanderer); the deep reservoir of stories found in the Icelandic Poetic Edda; the Old Saxon Heliand; the Old High German Muspilli, the Hildebrandslied and Otfrid von Weissenburg’s Evangelienbuch; the Latin and German lyrics found in the 11th-century manuscript known as the Cambridge Songs. Many of these have been recorded:

Endzeitfragmente / Fragments for the End of Time (10th-11th centuries)

Lost Songs of a Rhineland Harper (9th and 10th centuries)

The Rheingold Curse: A Germanic Saga of Greed and Revenge from the Medieval Icelandic Edda (8th century)

Vocalist, harper and medievalist Benjamin Bagby, who was captivated by medieval music as a boy, has been an important figure in the field of medieval musical performance for over thirty-five years. Since 1977, when he and the late Barbara Thornton co-founded Sequentia, his time has been almost entirely devoted to the research, performance, and recording work of the ensemble. Apart from this, Mr. Bagby is deeply involved with the solo performance of Anglo-Saxon and Germanic oral poetry. An acclaimed performance Beowulf has been heard worldwide and was released as a DVD in 2007. In 2010 he received the Howard Mayer Brown Lifetime Achievement Award from Early Music America. In addition to researching and creating over seventy programs for Sequentia, Mr. Bagby has published widely, writing about medieval performance practice. As a guest lecturer and professor he has taught courses and workshops all over Europe and North America. Since 2005 he teaches medieval music performance practice at the University of Paris – Sorbonne. www.BagbyBeowulf.com

Norbert Rodenkirchen, who studied flute and baroque traverso with Hans Martin Mueller and Günther Hoeller at the Staatliche Musikhochschule Köln, has been the flute player of Sequentia since 1996. He also works regularly with the French ensemble Dialogos directed by Katarina Livljanic. With both ensembles he has been invited to numerous international festivals. He is also much in demand as a composer of music for theater and film as well as a producer for CD projects. From 2003 to 2011 Norbert Rodenkirchen was the artistic director of the concert series Schnuetgen Konzerte – Musik des Mittelalters in the medieval museum of Cologne. With the singer Sabine Lutzenberger, Norbert Rodenkirchen released a very well received duo CD, In forgotten tones/Sangsprueche of Meister Frauenlob. Additionally he has given workshops on medieval instrumental improvisation at the Mozarteum Salzburg, at the Musikhochschule Köln, and the conservatories of Lyon and Liege. He is also preparing to publish his first book on that topic, Stante Pede – the lost art of medieval instrumental improvisation. In 2012 he released his third solo CD, Hameln Anno 1284 / Medieval flute music on the trail of the Pied Piper, on the label Christophorus/note1, and was consequently invited with that successful solo program to many international concert series or festivals in Copenhagen, Moscow, Boston, Paris, Oslo and Vancouver. www.norbertrodenkirchen.de

Hanna Marti is a native of Switzerland, and grew up in a medieval mill that her archeologist parents had converted into a rambling house. At fifteen, she was a rock guitarist and wrote songs for the band she started. She discovering singing, taking voice lessons with Dorothea Galli (Zürich), and, after getting interested in early music, studied at the Schola Cantorum Basiliensis in Basel. During those years Hanna Marti also became acquainted with the lute, studying with Peter Croton, and discovered the medieval harp. In 2015 she completed a Masters Diploma (voice) at the Schola Cantorum as a student of Evelyn Tubb. Since finishing her studies, Hanna Marti has focused most of her artistic work on medieval song. As a member of the women’s vocal ensemble Peregrina, she has performed and recorded in Europe, most notably in performances of Hildegard von Bingen’s Ordo Virtutum, co-directing the project and performing the role of Anima. In her own ensemble Moirai, (collaborating with American flautist Mara Winter) she is currently working on musical reconstructions of the Icelandic poetic Edda. Hanna Marti’s most recent solo project is a musical recitation and reconstruction of stories in Ovid’s Metamorphoses, sung in Latin and accompanied on a 12th-century harp. www.hannamarti.com

Maps were disabled by the visitor on this site. Click to open the map in a new window.
Diderot String Quartet