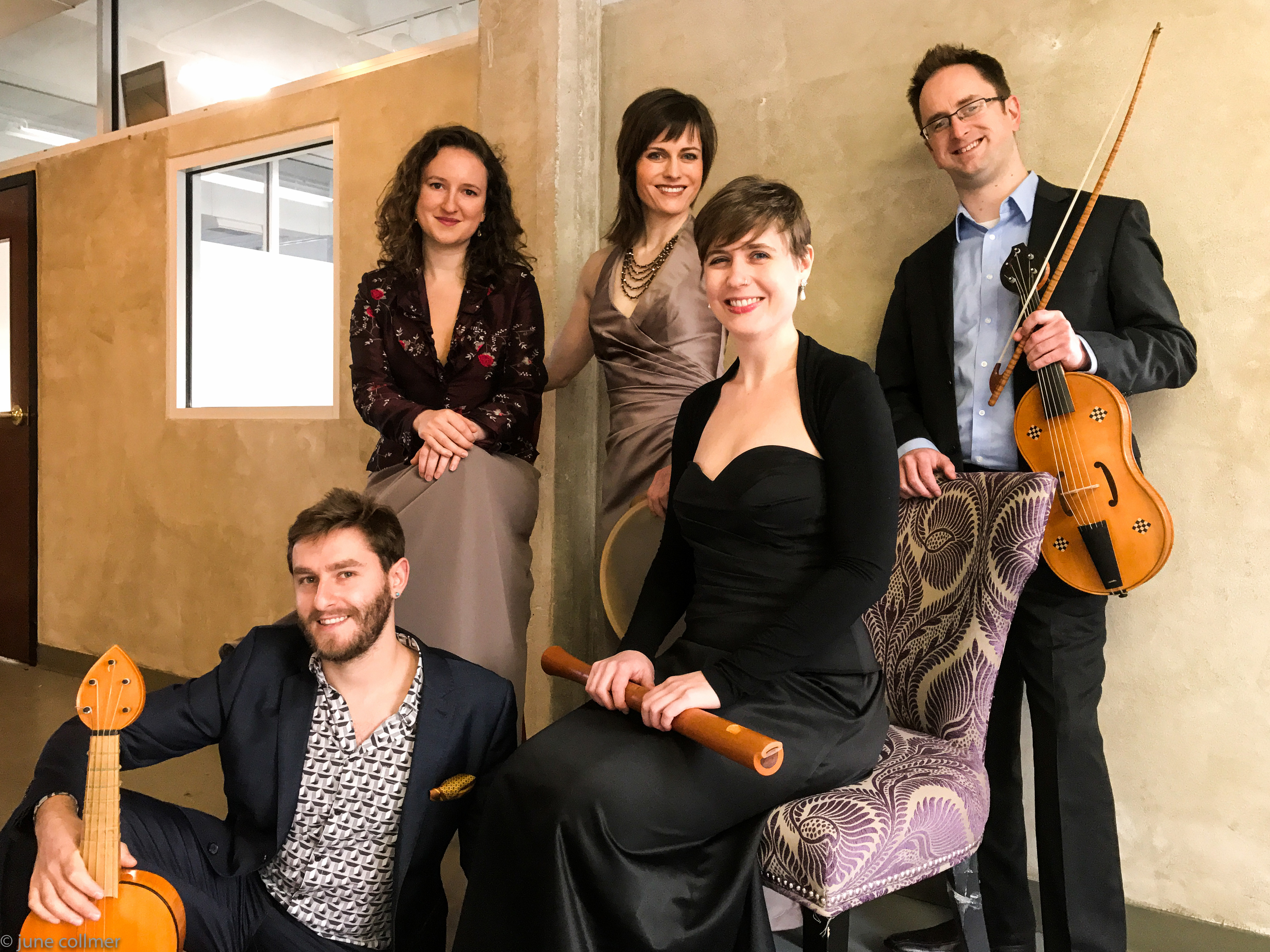 Five East Coast musicians founded Alkemie in 2013 to explore both the sublime and the earthly realms of medieval repertory. This Spanish program from the 13th to 16th centuries features singing and playing of multiple instruments—harp, recorders, vielle, and percussion. The pieces honor the Virgin Mary—most beautiful rose, miraculous healer, dragon slayer, and powerful intercessor during the upheaval of war.

“After hearing Alkemie at both the War Memorial Arts Initiative in Baltimore and at Capitol Early Music in Washington I eagerly booked them for the 2018 Indianapolis Early Music Festival. This is a terrific young medieval ensemble with great energy as well as scholarly chops.”

Founded in the spring of 2013 by five friends with a zeal for medieval music, Alkemie’s mission is to share the life-affirming and alternative perspectives to be experienced in the sounds of centuries past. More specifically, we specialize in medieval music for high voices and instruments, with a particular interest in exploring the porous boundaries between the “high” and “low” music of this period. Alkemie’s performances of medieval music are grounded in historical performance practice and fed by our love of experimentation.

Praised by the New York Times as “the real attraction” with a voice that is “light and lithe,” Tracy Cowart (mezzo-soprano, harp) has performed with a number of period ensembles, including the American Classical Orchestra, Apollo’s Fire, La Donna Musicale, Musica Pacifica, Opera Lafayette, the Newberry Consort, Seven Times Salt, Tenet, Three Notch’d Road, the Vox Vocal Ensemble, and the Washington Bach Consort. Tracy received her DMA in Historical Performance Practice from Case Western Reserve University and is on the faculty at the Amherst Early Music Festival. Tracy is also a teacher and performer of early dance with appearances at the Charlottesville Music Teachers Association, Pegasus Early Music, and El Fuego.

David McCormick (vielle) performs regularly on both violin and vielle and is in demand as an educator and arts leader. David is Executive Director of the Shenandoah Valley Bach Festival where he recently appeared as featured violin soloist for the opening concert of the 25th Anniversary Season. David also performed recently with Washington Bach Consort, Opera Lafayette, and as featured guest artist for the Bach-Handel Festival at Shenandoah University. He teaches private violin and viola lessons and offers workshops for educators, students, and performers in early-music performance practice. His degrees in music education and performance from Shenandoah University and Case Western Reserve University include specialized training in chamber music and historical performance.  He is a 2017 recipient of Shenandoah Conservatory’s Rising Stars Alumni Award.

Elena Mullins (soprano, percussion) has wide-ranging interests in the field of early music. She has sung with The Newberry Consort, Les Délices, Apollo’s Fire, Three Notch’d Road, Generation Harmonique, and Quire Cleveland, and is the director of Early Music Singers at Case Western Reserve University. Elena takes a scholarly interest in the performance practices of early repertoires, reaching back as far as the 12th century; in 2017 she co-founded the medieval ensemble Trobár. She holds a DMA in Historical Performance Practice from Case Western Reserve University and a BA in Musical Arts from the Eastman School of Music. Elena is an avid teacher of baroque dance, piano, and voice.

Sian Ricketts (soprano, recorders) enjoys a multi-faceted career as a singer and a period woodwinds specialist. She regularly performs with ensembles such as Bach Collegium Fort Wayne (IN), Apollo’s Fire (OH), Labyrinth Baroque (NY), and New Vintage Baroque (NY). In addition to her interest in early music, Sian also regularly performs 21st century repertoire as both an instrumentalist and singer, and has recently collaborated with composers such as Jonathan Dawe, Gregory Spears, Elliot Cole, and Mark Nowakowski. Sian holds a DMA degree in historical performance practice from Case Western Reserve University with concentrations in voice and baroque oboe.

Multi-instrumentalist Niccolo Seligmann (vielle and percussion) is an improviser, composer, arranger, producer, and educator. He plays over twenty acoustic instruments from around the world, and also designs his own software instruments. You can hear him play four instruments on the soundtrack of the PC game, Civilization VI. He received a degree in viol performance and early music from the Peabody Conservatory of Johns Hopkins University in 2015. He performs across North America and Europe with medieval ensembles such as The Broken Consort and Hesperus, and fondly recalls concerts at the Kennedy Center, in a bustling plaza in Nogales, Mexico, and inside a 2,000-year-old redwood tree in Northern California. 2016 marks the beginning of his industrial EDM drag queen side project, LADYPRODUKT. (niccoloseligmann.com)

Maps were disabled by the visitor on this site. Click to open the map in a new window.
Blue Heron