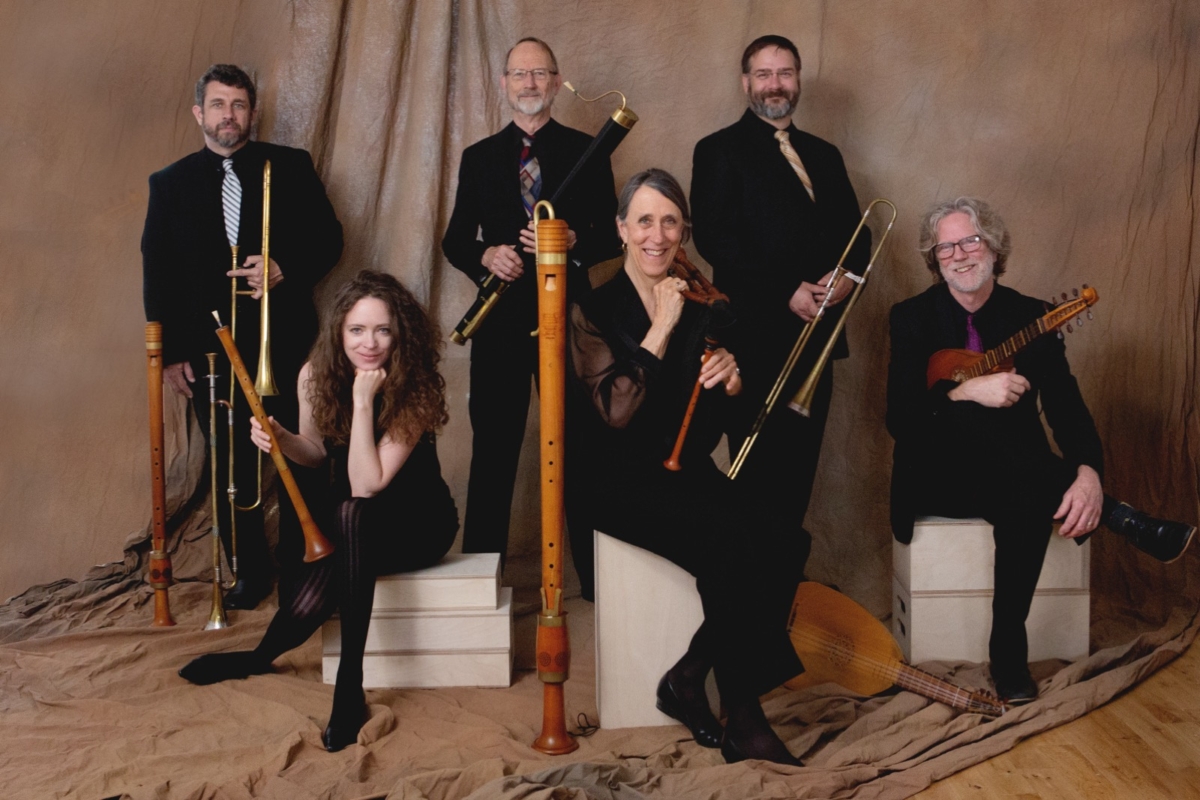 Plus Oultre: The Musical World and Legacy of Charles V

“The ensemble brought zest and allure to everything, whether they were sending streams of air through penetrating shawms, mellow sackbuts, beguiling bagpipes or delicate recorders. They evoke the period in all its exuberance, charm and spiritual depth.”—Plain Dealer

This concert is sponsored, in part, by Deborah Malamud.

No post-concert Q&A: Members of Piffaro were unavailable for the planned Q&A. Carefully made travel plans were disrupted on Sunday, delaying their return to Philadelphia from a residency at Florida State University.

Piffaro, The Renaissance Band delights audiences with polished recreations of the rustic music of the peasantry and the elegant sounds of the official wind bands of the late Medieval and Renaissance periods.  Its ever-expanding instrumentarium includes shawms, dulcians, sackbuts, recorders, krumhorns, bagpipes, lutes, guitars, harps, and a variety of percussion—all careful reconstructions of instruments from the period.

The Artistic Directors of Piffaro, The Renaisance Band are Joan Kimball and Bob Wiemken, the world-renowned pied pipers of early music. Piffaro presents an annual concert series in the Philadelphia region and tours throughout North and South America and Europe. It also participates in major early music festivals. Recordings are a significant part of the ensemble’s work: nineteen CDs have been released since 1992, including four on Deutsche Grammophon.

Grant Herreid has performed on early reeds, brass, strings, and voice with many early music ensembles. A noted teacher and educator, he received Early Music America’s Laurette Goldberg Award for Achievement in Early Music Outreach. On faculty at Yale University, he leads the Yale Collegium Musicum and the Yale Baroque Opera Project. Grant also directs the New York Continuo Collective and devotes much of his time to exploring the esoteric unwritten traditions of early music with ensembles Ex Umbris and Ensemble Viscera.

Greg Ingles attended Interlochen Arts Academy and graduated from Oberlin Conservatory and SUNY Stony Brook. Before his career in early music, Greg was the solo trombone in the Hofer Symphoniker. He is director of the early brass ensemble Dark Horse Consort and made his Carnegie Hall debut with Quicksilver. He plays with the American Bach Soloists, Concerto Palatino, The Handel + Haydn Society, Philharmonia Baroque, and Tafelmusik. He was in the Globe Theater’s Broadway debut of Twelfth Night and Richard III. Greg is currently Lecturer in Sackbut at Boston University.

Joan Kimball, artistic co-director and founding member of Piffaro, has concertized with the ensemble throughout the US, Europe, and South America, and has performed with many of the leading early music artists and ensembles in this country. Widely known in the early music community as a teacher of recorder, early double reeds, and bagpipes, she is on faculty at early music festivals and workshops across the country.

Erik Schmalz received degrees in trombone performance from Oberlin Conservatory of Music and the University of Cincinnati College-Conservatory of Music, but discovered early music and period instruments shortly thereafter. He has been a historic trombone specialist and performer for more than fifteen years, including in his instrumentarium a range of brass from a 14th-century straight trumpet copy to original romantic-era trombones. As a member of Piffaro, of Dark Horse Consort, and as a regular performer with Philharmonia Baroque Orchestra, Handel + Haydn Society, Tafelmusik, and Trinity Baroque Orchestra, Erik can be heard on many stages and on numerous recordings.

Bob Wiemken is artistic co-director of Piffaro, with which he has recorded extensively, built over 150 programs of Renaissance and early Baroque music, and commissioned new works for early winds and chorus. He has performed with leading early music ensembles, and with Piffaro in festivals in North and South America and Europe. He teaches at US festivals and workshops and directed the early music program at Temple University for twenty years. Currently he is Instructor Scholar for Early Woodwinds at Texas Tech University.

Héloïse Degrugillier has performed extensively on recorder and traverso throughout Europe and the United States with leading period ensembles including the Boston Early Music Festival Opera, Handel + Haydn, the Boston Camerata, and Tempesta Di Mare. She enjoys an active teaching career, working with the Amherst Early Music Festival, the Texas Toot, Pinewoods Early Music Week, and others. She has a MM degree from the Utrecht Conservatory in the Netherlands.

Guest oboist Fiona Last performs on historical winds across the US, the UK, and Europe with groups such as Piffaro, The Gabrieli Consort, The Handel + Haydn Society, Apollo’s Fire, Tempesta di Mare, the Carmel Bach Festival, and Opera Philadelphia. Her interest in early instruments stems from the belief that understanding a musical style through the instruments for which it was written can bring new life to music-making. Fiona holds music degrees from The Juilliard School, Yale School of Music, and Temple University.

Maps were disabled by the visitor on this site. Click to open the map in a new window.
ACRONYM