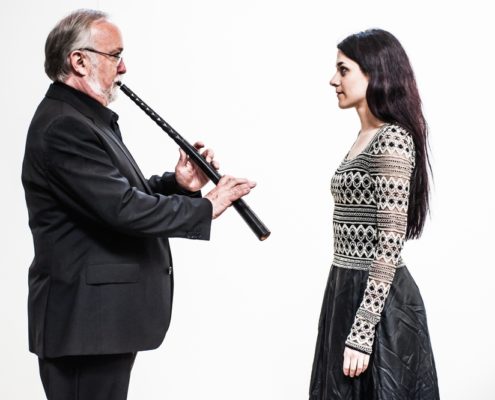 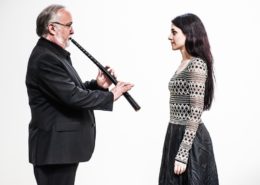 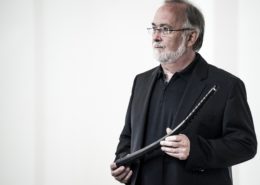 A Voice and a Cornetto Entwined

Join us from 3:15 – 3:45 p.m. for a pre-concert lecture by Bruce Dickey in the downstairs auditorium.

Legendary Bruce Dickey joins soprano Hana Blažíková to show the fabled ability of the cornetto and the human voice to imitate each other. In addition, the star-studded ensemble will leave the audience breathless performing music by Scarlatti, Marini, D’India, Fontana, Merula, Bassani, and Carissimi—along with the newly commissioned work Mélena Imí by Calliope Tsoupaki.

A co-production of Portland Baroque Orchestra and Pacific Music Works

“The plangent eloquence and dare-devil bravura of Bruce Dickey’s cornetto playing would charm the skin off a snake.” —BBC Music Magazine

“The Czech soprano … sings like an instrumentalist with clean lines, immaculate tuning and attention to rhythmic detail. The simple eloquence of Blažíková’s singing is most attractive.” —Opera News

Bruce Dickey is a performer and researcher who has devoted himself to the revival of the cornetto. He has taught cornetto and 17th-century performance practice at the Schola Cantorum Basiliensis in Basel (Switzerland) since 1976 and is founder and co-director of Concerto Palatino. In 2000, the Historic Brass Society awarded him the Christopher Monk Award for “his monumental work in cornetto performance, historical performance practice, and musicological scholarship.” In 2007, he was honored by British conductor Andrew Parrott with a “Taverner Award” as one of fourteen musicians whose “significant contributions to musical understanding have been motivated by neither commerce nor ego.” He has published numerous articles on the cornetto and performance practice. Together with Michael Collver, he has published a catalog of the surviving cornetto repertory, and, with trumpeter Edward Tarr, a book on historical wind articulation.

Hana Blažíková was born in Prague. As a child, she sang in the Radost Praha Children’s Choir and played the violin. In 2002 she graduated from the Prague Conservatory and today specializes in baroque, renaissance and medieval music, performing with ensembles and orchestras around the world, including Collegium Vocale Gent, Bach Collegium Japan, Amsterdam Baroque Orchestra, and Gli Angeli Genève. She has performed at many world festivals including Edinburgh International festival, Oude Muziek Utrecht, and Arts Festival Hong-Kong. In 2011 she made her debut in Carnegie Hall with Masaaki Suzuki´s Bach Collegium Japan and in the same year, she sang in Bach’s St. John Passion with the Boston Symphony Orchestra. Hana plays gothic and romanesque harp and presents concerts accompanying herself. She has recorded more than 30 CDs, including the well-known series of Bach cantatas with Bach Collegium Japan.

Monica Huggett was born in London and began playing violin at age six. At age sixteen, she entered the Royal Academy of Music, and at age nineteen, she was given a baroque violin to try. She was immediately won over by the mellow quality of the gut strings and became a fervent champion of all things baroque. Early in her career she was concertmaster of Amsterdam Baroque Orchestra and then artistic director of various orchestras and ensembles. In 2009, she was appointed the founding Artistic Director of The Juilliard School’s Historical Performance Program, and since 2012 has been artist-in-residence and artistic advisor as well as principal baroque violin teacher. Monica is Artistic Director of the Irish Baroque and Portland Baroque Orchestras. She performs as a solo violinist and guest director all over the world.

At home in Seattle, Tekla Cunningham is Orchestra Director and concertmaster of Pacific MusicWorks and is an artist-in-residence at the University of Washington. She founded and directs the Whidbey Island Music Festival and is concertmaster for American Bach Soloists. She has appeared as concertmaster or soloist with Baroque Chamber Orchestra of Colorado, Seattle Baroque, Musica Angelica, and Pacific Baroque Orchestra and has played with Apollo’s Fire, Los Angeles Opera, Philharmonia Baroque Orchestra, and Portland Baroque Orchestra as well as many at festivals including Berkeley Music Festival, Carmel Bach Festival, and Oregon Bach Festival. Tekla received her musical training at Johns Hopkins University and Peabody Conservatory, Hochschule für Musik and Darstellende Kunst in Vienna, and at the San Francisco Conservatory of Music. Tekla plays on a violin made by Sanctus Seraphin in Venice, 1746.

Joanna Blendulf, viola da gamba, has performed with early music ensembles throughout the United States and is a sought-after instructor as well. She performs regularly with Nota Bene Viol Consort, Wildcat Viols, Catacoustic Consort, Portland Baroque Orchestra, and Pacific MusicWorks. She has also played at Tage Alter Musik Regenburg, and Musica Antigua en Villa de Lleyva in Colombia. She has been a part of Bloomington, Boston, and Berkeley Early Music Festivals, as well as the Carmel and Oregon Bach Festivals. Ms. Blendulf graduated with honors from the Cleveland Institute of Music and the Jacobs School of Music at Indiana University where she was awarded the prestigious Performer’s Certificate for her accomplishments in early music performance. She has been on the faculties of the University of Oregon and Indiana University Historical Performance Institute. She teaches at viol workshops across the country.

Michael Sponseller is one of the outstanding American harpsichordists of his generation. Since graduating from Oberlin Conservatory of Music and the Royal Conservatory in The Hague, he has won several prizes and is a rare two-time winner at the Bruges Competition. He now enjoys a highly diversified career as harpsichordist and continuo organist with some of today’s finest musicians. He makes regular appearances with many of America’s baroque orchestras and ensembles including the Boston Early Music Festival, Bach Collegium San Diego, Les Délices, Tragicomedia, and the Aston Magna Festival. He has taught at the Longy School of Music, Baldwin Wallace University, and Oberlin’s Baroque Performance Institute. In 2014, he was named Associate Director of Bach Collegium San Diego. He has recorded on the Delos, Centaur, Electra, Vanguard Classics, RMAP, and Naxos labels.

Stephen Stubbs, lute, won the GRAMMY Award as conductor for Best Opera Recording 2015. After making a thirty-year career in Europe, he returned to his native Seattle in 2006. He enjoys a reputation as one of the world’s most respected lutenists, conductors, and baroque opera specialists. In 2007 Stephen established his new production company, Pacific MusicWorks, based in Seattle. He is the Boston Early Music Festival’s permanent artistic co-director; its recordings were nominated for five GRAMMY awards. Also in 2015 BEMF recordings won two Echo Klassik awards and the Diapason d’Or de l’Année. Stephen has appeared with many orchestras as a guest conductor. His discography includes well over 100 CDs. In 2013, Stephen was appointed Senior Artist in Residence at the University of Washington School of Music.

Maps were disabled by the visitor on this site.
Juilliard415 & Rachel Podger