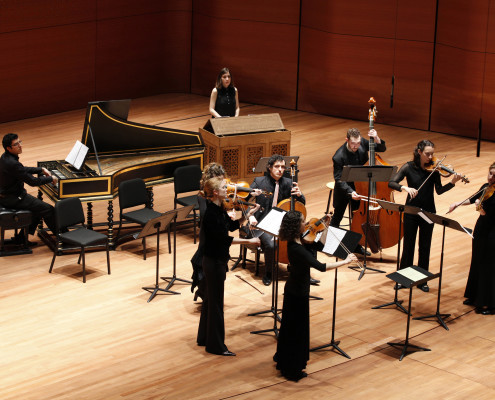 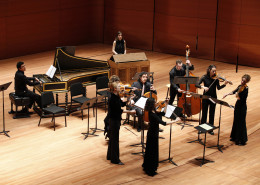 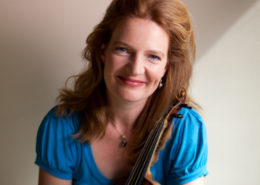 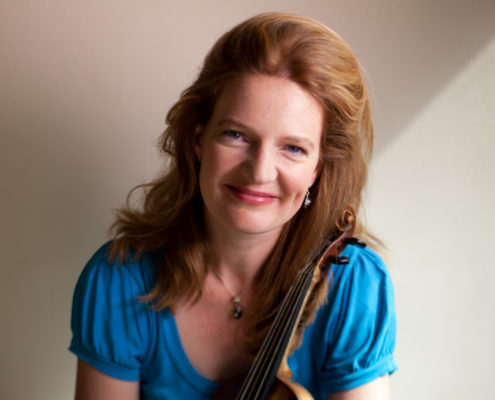 A più stromenti: Virtuoso Concertos of the Italian Baroque

Rachel Podger, the brilliant international violinist, leads Juilliard415’s gifted students in a performance of concertos by Veracini, Vivaldi, Corelli, and Valentini. Various combinations of strings, oboe, flute, and bassoon show off the composers’ ingenuity and the players’ virtuosity. A highlight will be Rachel Podger’s rendition of Vivaldi’s Concerto in D Major, “L’Inquietudine.”

“[Juilliard415] was simply flawless. In its beauty and restraint, its sense of tremendous energy and emotion held in just barely, the performance captured everything the Baroque can teach us.”  —New York Times

“It’s such a cliché to describe a person as a ray of sunshine…. Rachel Podger is living proof that clichés are based in reality.” —Toronto Star

Over the last two decades, Rachel Podger has established herself as a leading interpreter of music from the Baroque and Classical periods. She has been described as “the queen of the baroque violin“ (Sunday Times). In October 2015 Rachel was the first woman to be awarded the prestigious Royal Academy of Music/Kohn Foundation Bach Prize. She studied in Germany, and in England at the Guildhall School of Music and Drama with David Takeno and Micaela Comberti.

Rachel has enjoyed countless collaborations as a director and soloist with musicians all over the world—with Jordi Savall, and Masaaki Suzuki, and with The Academy of Ancient Music, Holland Baroque Society, the Handel and Haydn Society (USA), Tafelmusik (Toronto), Philharmonia Baroque Orchestra, European Union Baroque Orchestra, English Concert, and The Orchestra of the Age of Enlightenment. She has performed as a soloist at the Göttingen Handel Festival in Germany, the Izmir Festival in Turkey, Shakespeare’s Globe Theatre, and Wigmore Hall. Rachel has also collaborated and toured extensively with fortepianist Gary Cooper, with whom she recorded the complete Mozart Sonatas. She is resident artist at Kings Place for their 2016 season’s Baroque Unwrapped.

Rachel records exclusively for Channel Classics and has won numerous awards including a Baroque Instrumental Gramophone Award for La Stravaganza (2003), the Diapason d’Or de l’année in the Baroque Ensemble category for her recording of the La Cetra Vivaldi concertos with Holland Baroque (2012), a BBC Music Magazine award in the instrumental category for Guardian Angel (2014), and multiple Diapasons d’Or. She recorded the complete Vivaldi L’Estro Armonico concertos in 2015 with her own ensemble Brecon Baroque. It received multiple awards: Record of the Month for both BBC Music and Gramophone Magazines, the 2016 BBC Music Magazine Award, and the Diapason d’Or. Upcoming recordings with Brecon Baroque include Bach’s Art of Fugue (2016) and Vivaldi’s Four Seasons (2017).

Rachel is founder and Artistic Director of the Brecon Baroque Festival. She is a dedicated educator and holds an honorary position at both the Royal Academy of Music where she holds the Micaela Comberti Chair for Baroque Violin (founded in 2008), and the Royal Welsh College of Music and Drama where she holds the Jane Hodge Foundation International Chair in Baroque Violin. She is also a regular visitor to The Juilliard School in New York.

Future engagements include international tours with The Orchestra of the Age of Enlightenment and Philharmonia Baroque (USA); performances with Kristian Bezuidenhout, Maggie Cole, and Jane Rogers as well as recitals, concerts and workshops at Berkeley Early Music Festival, The Oregon Bach Festival, Kings Place, Juilliard, and the Royal Academy of Music. Rachel Podger is managed worldwide by Percius.

Juilliard’s full-scholarship Historical Performance program was established and endowed in 2009 by the generous support of Bruce and Suzie Kovner, and is open to candidates for the Master of Music, Graduate Diploma, and Doctor of Musical Arts degrees. It offers comprehensive study of music from the 17th and 18th centuries. A high-profile concert season of opera, orchestral, and chamber music is augmented by a performance-oriented curriculum that fosters an informed, vital understanding of the many issues unique to period-instrument performance with the level of technical excellence and musical integrity for which Juilliard is renowned. The faculty assembles many of the leading performers and scholars in the field. The frequent collaborations with Juilliard’s Ellen and James S. Marcus Institute for Vocal Arts and the integration of modern-instrument majors outside of the Historical Performance program have introduced new repertory. The collaborations also have increased the awareness of historical performance-practice at Juilliard.

Since its founding, Juilliard415 has made significant contributions to musical life in New York and beyond, bringing major figures in the field of early music to lead performances of both rare and canonical works of the 17th and 18th centuries. Among the distinguished guests who have led Juilliard415 are Harry Bicket, William Christie, the late Christopher Hogwood, Monica Huggett, Ton Koopman, Nicholas McGegan, Jordi Savall, Lars Ulrik Mortensen, and Masaaki Suzuki. Juilliard415 tours extensively in the U.S. and abroad. It has appeared at the Boston Early Music Festival, Leipzig Bachfest, and Utrecht Early Music Festival (where Juilliard was the first-ever conservatory-in-residence). With the Yale Institute of Sacred Music, its frequent musical collaborator, the ensemble has performed throughout Italy, Japan, Southeast Asia, and the U.K. Recent milestones include fully-staged productions of Cavalli’s La Calisto and Handel’s Radamisto, a tour of Charpentier’s Actéon, and concerts in New York and Miami of incidental music to Shakespeare plays in collaboration with the Juilliard Drama Division. It has also offered audiences the rare opportunity to hear both Bach Passions in successive months.

This season’s highlights include tours to Holland of Bach’s Mass in B Minor conducted by Koopman (a collaboration with the Royal Conservatoire of The Hague), to India with the Yale Schola Cantorum under the direction of David Hill, and to New Zealand with Bach specialist Masaaki Suzuki. The season sees a celebration of the Italian concerto led by Rachel Podger on the Music Before 1800 series, symphonies of Haydn with Huggett, fortepianist Kristian Bezuidenhout leading symphonies and concertos by Mozart, and an all-Rameau program with Christie and tenor Paul Agnew. The bountiful season also includes music of Bach conducted by Suzuki, Handel’s Agrippina in concert at Alice Tully Hall conducted by Laurence Cummings in his Juilliard debut, and fully-staged performances at the school’s Rosemary and Meredith Willson Theater conducted by Jeffrey Grossman.