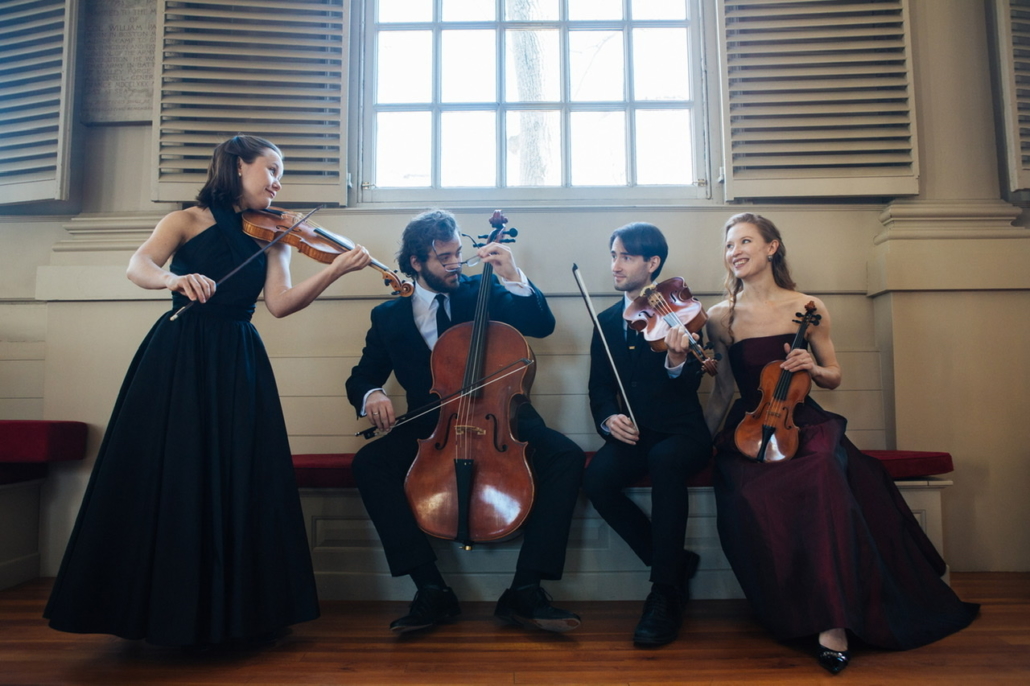 From Russia with Love: String Quartets for Catherine the Great

The Diderot String Quartet’s energetic performers Johanna Novom, Adriane Post, Kyle Miller, and Paul Dwyer find themselves irresistibly drawn to unusual 17th- and 18th-century repertory. They have selected a fresh sounding quartet by Anton Ferdinand Titz, a favorite composer of Catherine the Great, doyenne of the Russian Enlightenment. Their second offering is Haydn’s Quartet in E-flat from his “Russian” quartets, nicknamed the “Joke.”

“Enveloped in the rich sound of period strings, the quartet as performed by Diderot was emotional, riveting and ultimately cathartic. Diderot isn’t the only early-music group trying to revive interest in the genre, but it’s right up there with the best in the field.”—Wall Street Journal

The Diderot String Quartet is named after the 18th-century French philosopher and Boccherini enthusiast, Denis Diderot. It brings a fresh approach to works of the 18th and 19th centuries. Called “emotional, riveting, and ultimately cathartic” (Wall Street Journal), the quartet came together in 2012 after the members met at Oberlin Conservatory and The Juilliard School. The four musicians share a background in historical performance and a passion for the string quartet genre, and all of them find the thrill of exploring the quartet repertory on period instruments to be irresistible. Recent and upcoming engagements include Chamber Music Pittsburgh, Santa Fe Pro Musica, Lincoln Friends of Chamber Music (NE), Connecticut Early Music Festival, Friends of Chamber Music Vancouver and Early Music Vancouver, Music in the Somerset Hills (Bernardsville, NJ), Rockefeller University’s Tri-I Noon Recital Series, Carmel Bach Festival (CA), and The Crypt Sessions (NY). Diderot has also been featured at the Metropolitan Museum of Art, the Toledo Museum of Art, and the Morgan Library in New York. The quartet served as Quartet-in-Residence at Washington National Cathedral for five seasons and as guest faculty for Oberlin’s Baroque Performance Institute. It collaborates frequently with internationally acclaimed artists including David Breitman, Avi Stein, and Harry Bicket.

Cellist Paul Dwyer was born in Munster, Indiana, but spent his childhood in Vienna and Munich. Dwyer returned to the American Midwest for college, studying at the Oberlin Conservatory (BM ’07) and the University of Michigan (MM ’08 and DMA ’12), where he received a Javits Fellowship and Presser Award. He spent a year in Amsterdam as a Fulbright Fellow studying new music with Frances-Marie Uitti and baroque cello with Anner Byslma. In 2013, he completed additional graduate studies in the Historical Performance department of The Juilliard School. Paul is fortunate to have a rich musical life playing both historical and modern cello. He is a founding member of Diderot String Quartet and ACRONYM, and loves to play chamber music and collaborate with young composers.  He is assistant principal cello of Lyric Opera of Chicago and teaches at Notre Dame University.

Violist Kyle Miller made his concerto debut in 2005 with the Reading (PA) Symphony Orchestra as “the dog” in P.D.Q. Bach’s Canine Cantata, Wachet Arf! Since that day, Kyle has gone on to study at the New England Conservatory and the Eastman School of Music, and earned masters degrees in both viola performance and historical performance at The Juilliard School. Also a member of ACRONYM, Four Nations Ensemble, and New York Baroque Incorporated, Kyle has appeared onstage with A Far Cry, Apollo’s Fire, Clarion, House of Time, Opera Lafayette, Quodlibet Ensemble, Tafelmusik, and Trinity Baroque Orchestra. Kyle has performed regularly at the Carmel Bach Festival and the Staunton Music Festival. In 2015, Kyle was selected to be an English Concert American Fellow. In 2017 and 2018, Kyle appeared on Broadway in a run of Claire van Kampen’s play, Farinelli and the King.

Violinist Adriane Post is sought after as a leader, collaborator, and soloist in ensembles across the US. She is a founding member of ACRONYM and Diderot String Quartet, associate principal of Apollo’s Fire, soloist and collaborator with Four Nations Ensemble, and guest concertmaster with Seraphic Fire and NY Baroque Inc., among others. A tenured member of Handel and Haydn Society, Adriane performs regularly with Trinity Wall Street Baroque Orchestra. She has appeared with The English Concert and Harry Bicket, and as a guest with Les Délices, Chatham Baroque, and Tenet. Recent and upcoming festival appearances include Carnegie Hall, Caramoor, Tanglewood, Ravinia, and Carmel Bach Festival. Adriane received her BM from Oberlin Conservatory, where she first fell in love with the baroque violin. She received her MM from The Juilliard School’s Historical Performance program.