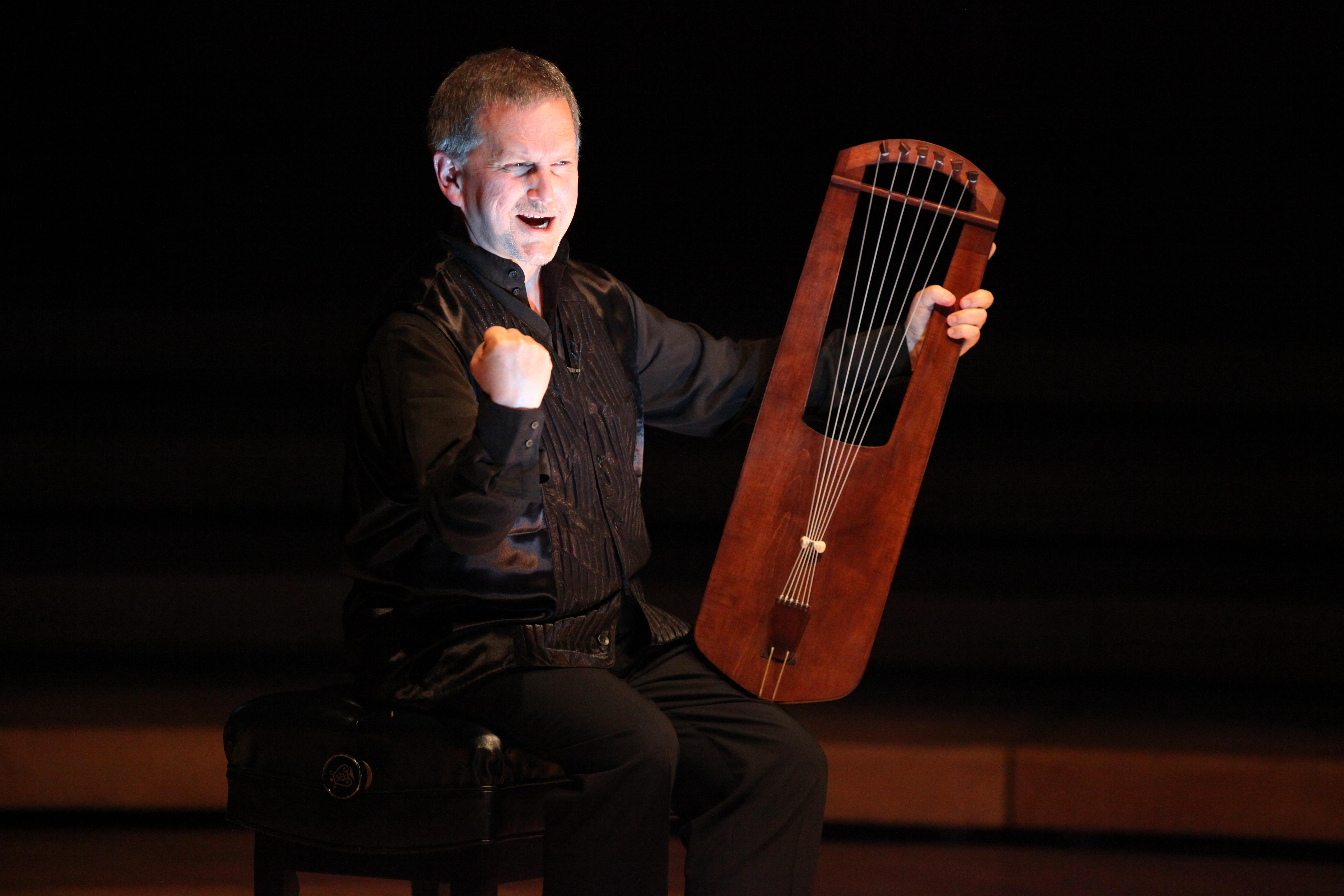 Accompanying himself on a six-stringed harp, Benjamin Bagby takes on the role of medieval scop, or “singer of tales,” to relate the Anglo-Saxon poem Beowulf through speech and song. Bagby’s dramatic retelling of Beowulf and the Icelandic Edda, scholarly reconstructed epics from the Middle Ages, is an invaluable gift to the music world. Based in Paris, he teaches at the Sorbonne and also directs Sequentia.

“Bagby is an uninhibited interpreter and actor. His baritone is strong and expressive, his gestures simple and vivid…. The performance is an extraordinary feat of scholarship, imagination, memory, musicianship and, most of all, story-telling. He has a communicative power that transcends language.”

Benjamin Bagby is descended from a Germanic clan which emigrated from Jutland to northern England in ca. 630, from where his branch of the family emigrated to the colony of Virginia almost a millennium later. Following 321 years of subsequent family wanderings, he was born on the shores of the Great Lakes, and twelve years later was captivated by Beowulf. His formal music schooling took place at the Oberlin Conservatory (he also earned a degree in German literature from Oberlin College), and the Schola Cantorum Basiliensis in Basel, Switzerland.
Several years after moving back to Europe in 1974 he founded—together with the late Barbara Thornton—the ensemble for medieval music, Sequentia, which was based in Cologne, Germany, for twenty-five years. Since 2001 Mr. Bagby and Sequentia have been based in Paris. Both Sequentia and Mr. Bagby have performed regularly on the Music Before 1800 series, beginning in the late 1970s.
In addition to his activities as singer, harper and director of Sequentia, Benjamin Bagby teaches widely in Europe and North America. From 2005 until 2018 he was on the faculty of the Sorbonne University in Paris, where he taught in the master’s program for medieval music performance practice; as a guest lecturer and professor, he has taught courses and workshops across Europe and North America; and he currently holds a teaching position in the medieval music performance program at the Folkwang University of the Arts in Essen, Germany. In addition to researching and creating over seventy programs for Sequentia, Mr. Bagby has published widely, writing about medieval performance practice, most recently in the Cambridge History of Medieval Music. In 2010 he received the Howard Mayer Brown Lifetime Achievement Award from Early Music America. In 2017, he was awarded the Artist of the Year Award by REMA, the European Early Music Network.
Beyond his work with Beowulf, Mr. Bagby and Sequentia have produced numerous programs as part of the Lost Songs Project. The most recent of these programs, Boethius: Songs of Consolation from 11th century Canterbury, was released as a CD in 2018. Other recordings include musical reconstructions from the medieval Icelandic Edda, one of which, The Rheingold Curse, was also staged in 2001 for the Lincoln Center Festival by the New York stage director Ping Chong. Another of the ensemble’s recent CDs, Fragments for the End of Time, explores early medieval songs about the Apocalypse.
A DVD production of Mr. Bagby’s Beowulf performance, filmed by Stellan Olsson in Sweden, became available in 2007. It contains numerous extra features, including interviews with noted Anglo-Saxonists and the performer.