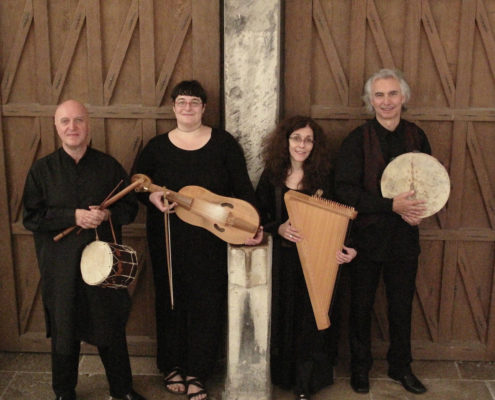 Join us for a Post-concert Q and A by Pierre Hamon and Carlo Rizzo.

Alla francesca’s agile singers and players of multiple medieval instruments—harp, recorders, panpipes, bagpipes, fiddle, and percussion—fuse the music of the “joglars,” or minstrels, with the Occitan poetry of the “trobars,” or troubadours. Courtly 11th- through 13th-century songs by Na Castelloza, Bernart de Ventadorn, and others, alternate with instrumental improvisations.

“If we were allowed only one word to describe the Trobar & Joglar, … the word enthusiasm would come most naturally to mind as [the group] exudes a lingering feeling of jubilation, even when the mood is somewhat melancholy.” —Passée des arts

Since its founding in the early 1990s, Alla francesca has explored all types of music from the Middle Ages up to the early Renaissance: solo songs in the various Romance languages, pieces meant specifically for instruments, polyphony, and folk music whose roots go back to that early era.

Since 2000, the ensemble has been under the joint direction of Brigitte Lesne and Pierre Hamon, depending on the program or project. As experts in the interpretation of mediaeval music, Alla francesca can be heard in the most important early music festivals on every continent. The group has released seventeen recordings, the latest, troubadour songs Trobar & Joglar, and Jewish songs from the north of France. This year, Alla francesca collaborated with a contemporary dance company.

Brigitte Lesne devotes herself entirely to the earliest music. As singer and director of the Discantus ensemble, she specializes in sacred music (Gregorian chant and polyphony from the 10th to 15th centuries). With Alla francesca, she focuses on secular music. She sings, accompanying herself on various instruments. She also appears in solo recitals and directs choirs, frequently sharing her knowledge in training programs and master classes. She is a regular teacher at the Centre de musique médiévale de Paris.

Pierre Hamon plays the entire recorder repertory—medieval, renaissance, baroque and contemporary—and teaches recorder at the Conservatoire National Supérieur de Lyon. As a wind player, he has developed a passion for various traditional instruments from all the continents and has studied them with the most important masters. He also performs solo recitals in a large field of music, from ancient to traditional, contemporary or improvised. He has been a regular performer with Jordi Savall for more than fifteen years.

Vivabiancaluna Biffi studied and specialized in singing and medieval and renaissance bowed instruments at the Schola Cantorum Basiliensis. She appears regularly both as a recital soloist as well as with major European early music ensembles including Alla francesca, Machaut’s projects, Gilles Binchois, Les Flamboyants, Tasto Solo, and Hesperion XXI. She has conducted masterclasses at the Lyon Conservatoire, Royaumont Foundation, and the Schola Cantorum Basiliensis in addition to her teaching in Paris at the Centre de musique médiévale de Paris.

Carlo Rizzo is both a tambourine virtuoso and an accomplished expert in traditional music from different regions of Italy, his native country. He brings together early music, jazz, and improvised music and collaborates with important performers such as Lucilla Galeazzi, Giovanna Marini, Valentin Clastrier in traditional music and Marc Perrone, Bernard Lubat and Michel Godard in jazz. In the early music field, he regularly performs with the ensemble Alla francesca. Besides his activities as a performer he has created new instruments such as poly-timbral and multi-timbral tambourines.

Maps were disabled by the visitor on this site. Click to open the map in a new window.
ACRONYM & Jesse Blumberg