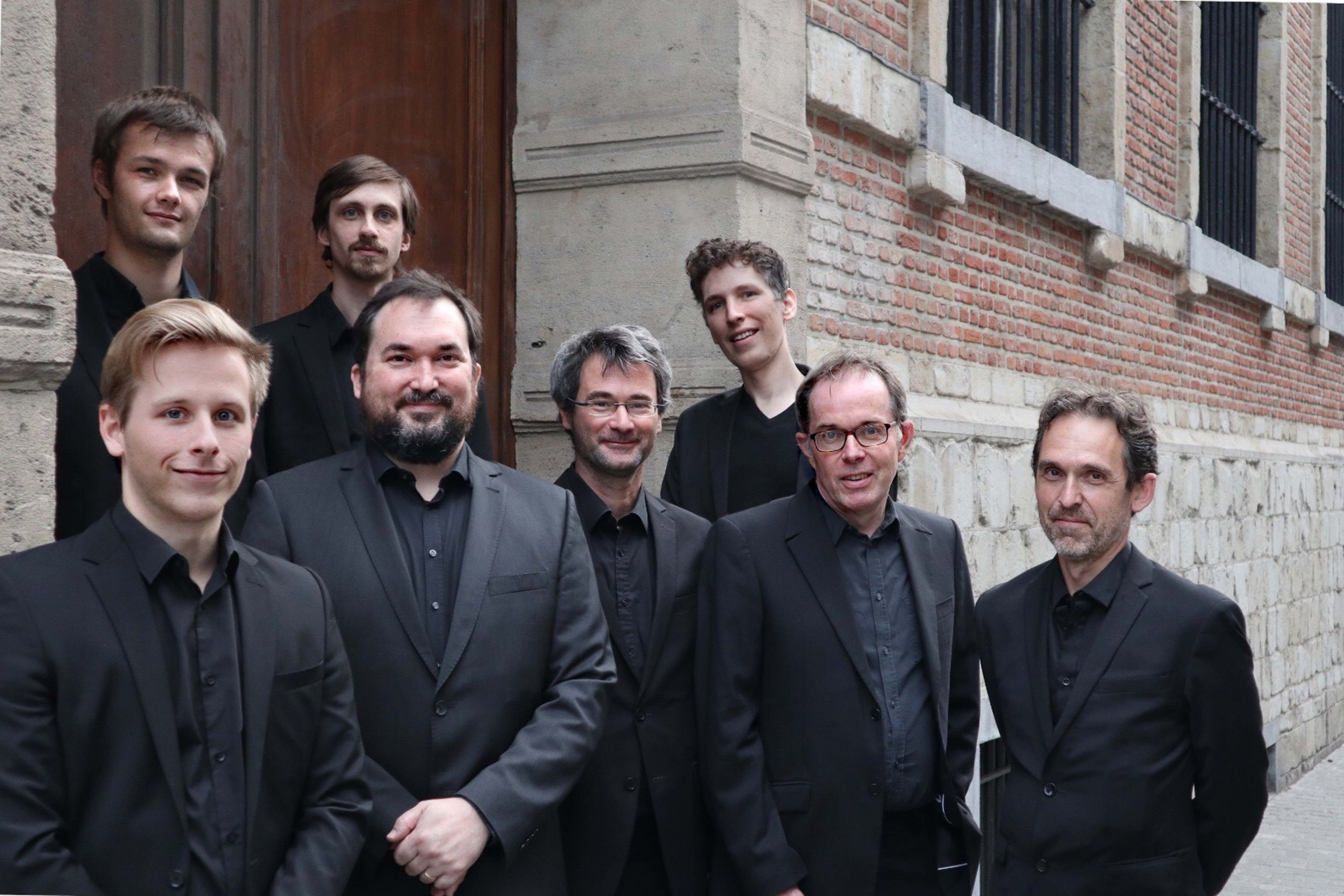 Canons of Beauty: Josquin and Mouton

Under the direction of Stratton Bull, the eight men of Cappella Pratensis from the Netherlands commemorate the 500th anniversaries of two extraordinary composers’ deaths—Josquin Desprez’s death in 1521, and Jean Mouton’s a year later. The breathtakingly beautiful mass movements, motets, and chansons conceal their intricate complexities to sound seemingly effortless and ethereal. The pieces’ canonic sections often provide a puzzle to be solved when one or more voices are implied but not written out.

“Their singing was impeccably clean, in timbre and balance alike. In repertoire so often thought to be all about the intellectual beauty of counterpoint, they drew out the more vital beauty of melody.” —Chicago Classical Review

The virtual program becomes available on Sunday, April 23, 4 p.m. ET and remains viewable until May 7.

Cappella Pratensis specializes in the music of Josquin Desprez (i.e., Josquinus Pratensis) and other polyphonic composers of the 15th and 16th centuries. The ensemble performs its own programs and original interpretations, which are based on academic research. As was customary in the Renaissance, the singers of Cappella Pratensis usually stand around a central music stand, singing from facsimiles of original choirbooks. This creates a unique perspective on the repertoire. The ensemble, founded in 1987, is now under the artistic direction of singer and conductor Stratton Bull.

In addition to regular concerts in the Netherlands and Belgium, Cappella Pratensis performs in leading international festivals and venues in France, Portugal, Germany, and the United States. The ensemble has also released several CDs which have been greeted with rave press reviews and awards, including the Diapason d’Or and the Prix Choc. From 2005 to 2007, Cappella Pratensis was ensemble-in-residence at the Fondation Royaumont (France), where it gave courses and concerts, and worked with several prominent musicians. In 2009, it released a DVD/CD production of the Missa de Sancto Donatiano by Jacob Obrecht. It contained a reconstruction of the first performance of this mass, supplemented with extensive documentation, and filmed on location in Bruges. This production was awarded a Diapason découverte and the highest rating in the professional magazine, Classica.

The CD Vivat Leo! Music for a Medici Pope (2010), directed by guest conductor Joshua Rifkin, was awarded a Diapason d’Or. A successful series of concerts of the Requiem of Pierre de la Rue was led by guest conductor Bo Holten. A DVD of one of these concerts, performed as part of the event Jheronimus Bosch 500, was released in 2010 under the title Bosch Requiem.

In 2016, Cappella Pratensis and the Nederlands Kamerkoor performed eight concerts of the world premiere of the Missa Unitatis, composed in 2008 by Anthony Pitts (b. 1969) in a unique partnership with choirs in Antwerp, Breda,

’s-Hertogenbosch, Eindhoven, Tilburg and Helmond. It has also performed during the Early Music Festival in Utrecht, and presented five performances of the program, “Christmas with Josquin in the Season of Early Music.”

Cappella Pratensis shares its vision and approach to vocal polyphony with professionals and amateurs in masterclasses using multimedia presentations, and also in a week-long summer school that takes place annually during the festival Laus Polyphoniae in Antwerp. In a structural collaboration with the universities of Leuven and Oxford, the musical manuscripts of the workshop of Petrus Alamire are explored by musicologists and adapted for use by other musicians.

After completing studies in language and literature, Stratton Bull studied voice at the Royal Conservatory in his native Toronto and subsequently at the Royal Conservatoire in The Hague. As a singer, he has performed with leading ensembles in Europe and North America including Tafelmusik (Toronto), Hesperion XX, Cantus Cölln, and Capilla Flamenca. He has sung in Cappella Pratensis since 1988, shortly after its founding. Artistic director since 2004, Stratton Bull has developed a special interest in the performance of 15th- and 16th-century polyphony from original notation. He has given frequent workshops and masterclasses on this approach to performance practice. Through his work with the Alamire Foundation (International Centre for the Study of Music in the Low Countries, University of Leuven), he collaborates closely with musicologists on projects related to the music sung by Cappella Pratensis, including the digitization of late medieval music sources.

Maps were disabled by the visitor on this site. Click to open the map in a new window.
Blue Heron