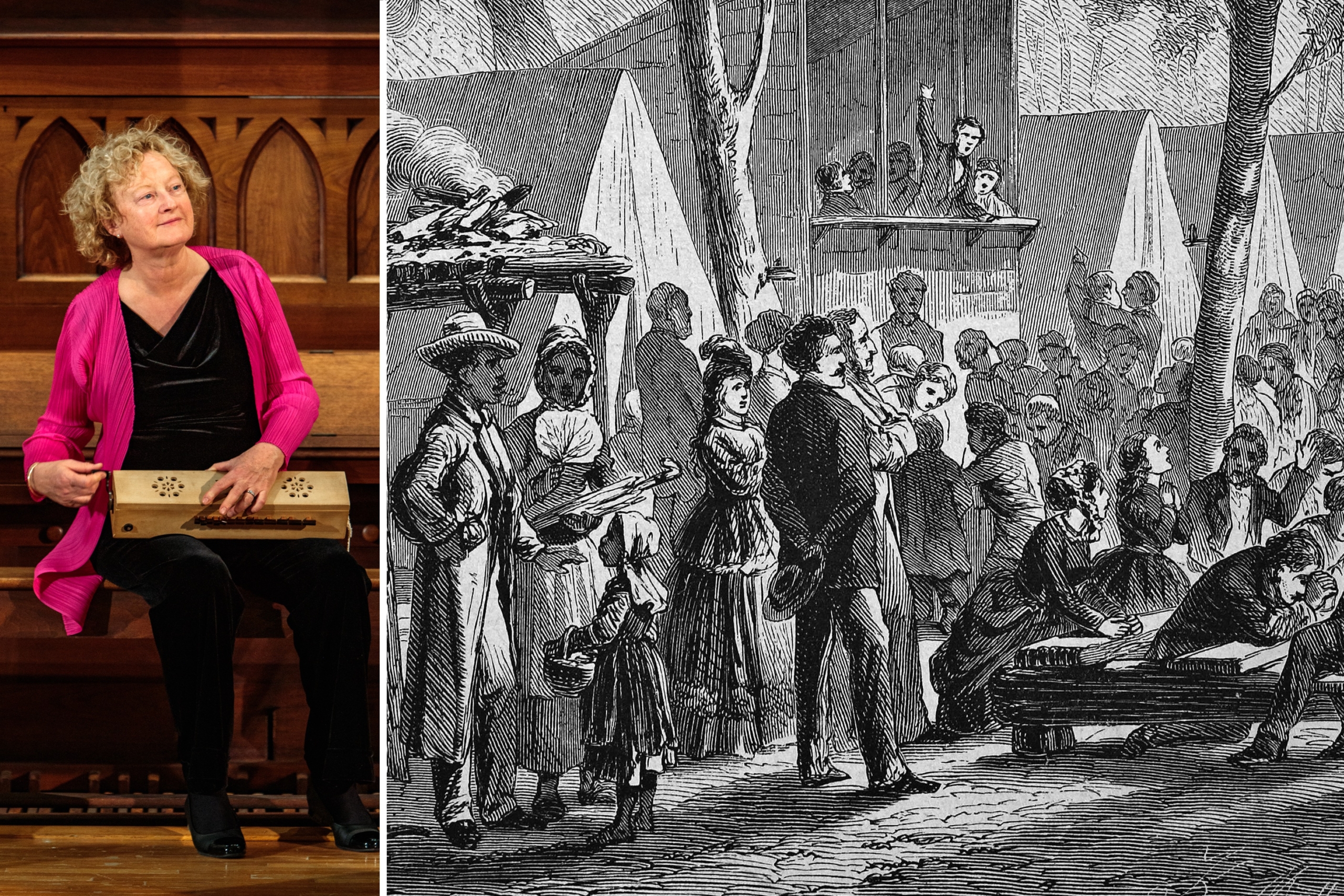 The 48th season opens with Boston Camerata’s performance of “We’ll Be There,” Music Before 1800’s first annual presentation specifically dedicated to American Roots. Under the passionate guidance of director, Anne Azéma, eight vocalists join with a fiddle, guitar, bass, and keyboard. From plantation songs (“My body rock long fever”) to songs of freedom (“Safe in the Promised Land”), the harrowing journey out of slavery is given a visceral account through folksongs, spirituals, and hymns.

“The [Camerata] ensemble takes you to a place of hope, redemption, and everlasting peace …. Simply beautiful.” —Der Spiegel

The Boston Camerata occupies a unique place in the densely populated universe of European and American early music ensembles. Camerata’s distinguished rank stems partly from its longevity. It was founded in 1954 when the field of endeavor was in its infancy as an adjunct to the Boston Museum of Fine Arts’ musical instruments collection. Camerata is now one of the longest-lived groups to be vigorously functioning up to the present day.

But length of service by itself is not sufficient to account for Camerata’s preeminence, nor are its numerous international distinctions. The Boston Camerata has achieved its eminence in large part because of its willingness to approach, with consistent success, a variety of historical repertoires from the early Middle Ages to the 19th century. It performs music from many places and cultures stretching from the Middle East to early New England with numerous intermediate stops in Renaissance and Baroque Europe, and in Latin America. Directed from 1969 to 2009 by Joel Cohen, and to the present day by Anne Azéma, the Boston Camerata has continued to create, over more than a half century of activity, a large number of performances and recorded productions. These include, most recently, Daniel: A Medieval Masterpiece Revisited, Dido & Aeneas, and Free America: Early Songs of Resistance and Rebellion.

Anne Azéma, French-born vocalist, scholar and stage director, has led the Boston Camerata since 2009. Intensely engaged since her student days with the song repertoire of the Middle Ages, she is esteemed as a charismatic solo performer. But she is also widely admired for her creative skill in building and directing complete musical productions of varied styles and periods, both for her recital programs and for larger ensemble forces (concert and stage) in Europe and the United States.

Joel Cohen, guitar, trained as a composer at Harvard University with Randall Thompson and Nadia Boulanger. Among his many awards are the Edison Prize (Netherlands), the Ordre des Arts et des Lettres (France), and the Georges Longy Award (United States). He is the Music Director of the Camerata Mediterranea, an international, intercultural institute of musical exchanges devoted to research, dialogue, and pedagogy involving the diverse musical civilizations of the Mediterranean basin—Christian, Jewish, and Muslim.

Phillip K. Bullock, baritone, is one of the newest members of the Camerata. Phillip has performed roles in operas such as Porgy & Bess, The Magic Flute, and Carmen and has been seen in several concert performances with the National Music Festival Orchestra (MD).

Libor Dudas, keyboard, is a regular collaborator with the Camerata. Libor studied fortepiano with Peter Sykes, and harpsichord with Darlene Catello and Edward Parmentier. He is active on the faculty of Longy School of Music, of Bard College, and Boston Conservatory.

In addition to his work with the Boston Camerata, Corey Dalton Hart, tenor, performs with the Boston Baroque Ensemble, Renaissance Men, and the Ashmont Bach Project, among others.

Along with the Camerata, Eric Martin, fiddle, has also performed with ensembles including Syracuse Symphony, Orchestra of the Southern Fingerlakes, and the Irish Chamber Orchestra, among many others.

MaKayla McDonald, soprano, is a new collaborator with the Camerata. She has worked with the American Opera Project, New York University/Tisch, and with Butler University’s Jordan College of the Arts. She holds a MM from the University of Northern Iowa.

Camila Parias, soprano, is a regular collaborator with Camerata. Most recently she performed in the much acclaimed Daniel: A Medieval Masterpiece. She can be heard on several Camerata CDs including Free America! and A Medieval Christmas-Hodie Christus Natus Est.

Jordan Weatherston Pitts, tenor, is a regular collaborator with the Camerata. Since 2014 he assumed prominent roles in the Camerata’s Play of Daniel and The Night’s Tale. Jordan was recently acclaimed as the queen Renata in Iain Bell and Mark Campbell’s world premiere of Stonewall with New York City Opera.

Deborah Rentz-Moore, mezzo soprano, is a long-time performer with the Camerata. She is featured in a video with the Boston Camerata, and she also performs with Voices of Music, Emmanuel Music, and at the University of New Hampshire where she is a resident artist. Deborah sings solos on the Camerata’s acclaimed Free America! CD and the new release, Hodie Christus Natus Est.

Luke Scott, bass-baritone, is a frequent performer with the Camerata. He will be seen as Aeneas in the upcoming Dido & Aeneas. Luke’s credits also include performances with Opera on the Avalon, Salt March Opera, and the Boston Opera Collective, among others.