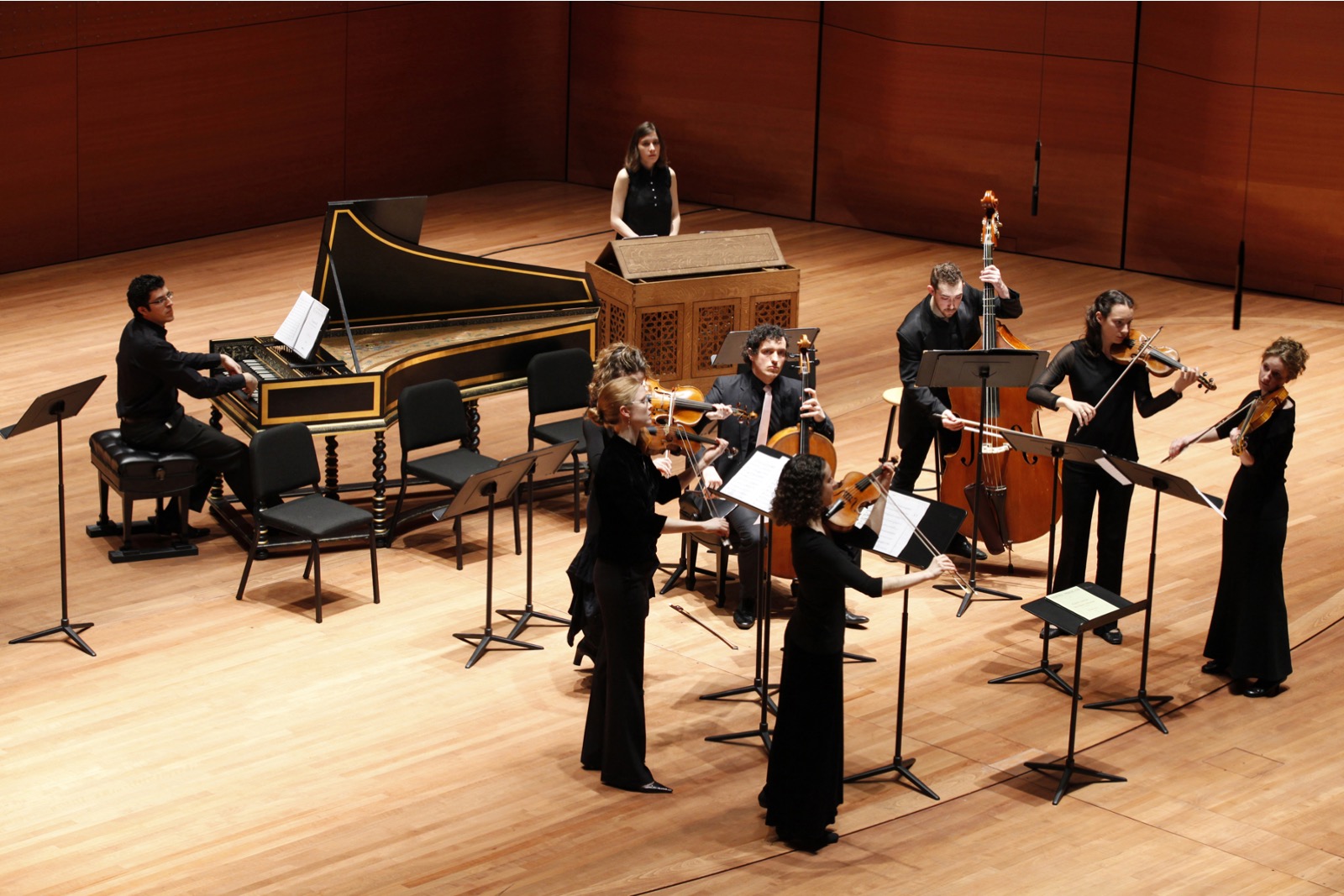 “Juilliard415, the student orchestra of the school’s historical performance program, opened … the second half with the Brandenburg Concerto No. 3. The concerto was especially fine: you could see the joy in the performers’ faces and movements as much as you could hear it in the playing.”—New York Times

Note: Featured artist has been changed from Elisa Citterio to Rachel Podger.

The virtual program becomes available on Sunday, December 12, 4 p.m. ET, followed by a live Q&A, and remains viewable until December 26.

Since its founding in 2009, Juilliard415, the school’s principal period-instrument ensemble, has made significant contributions to musical life in New York and beyond, bringing major figures in the field of early music to lead performances of both rare and canonical works by composers of the 17th and 18th centuries. The many distinguished guests who have led Juilliard415 include Harry Bicket, William Christie, Monica Huggett, Nicholas McGegan, Rachel Podger, and Jordi Savall. Juilliard415 tours extensively in the US and abroad, and has performed on five continents with notable appearances at the Boston Early Music Festival, Leipzig Bachfest, and Utrecht Early Music Festival where Juilliard was the first-ever conservatory in residence. Juilliard415 made its South American debut with concerts in Bolivia, a tour sponsored by the U.S. Department of State, and has twice toured to New Zealand.

With its frequent musical collaborator, the Yale Institute of Sacred Music, the ensemble has performed throughout Scandinavia, Italy, Japan, Southeast Asia, the UK, and India. In a concert with the Bach Collegium Japan conducted by Masaaki Suzuki, Juilliard415 played a historic period-instrument performance of Mendelssohn’s Elijah at the Leipzig Gewandhaus in Germany. Previous seasons have been notable for side-by-side collaborations with Les Arts Florissants at the Philharmonie de Paris and with Philharmonia Baroque in San Francisco. Notable as well are concerts directed by such eminent musicians as Ton Koopman, Kristian Bezuidenhout, and the late Christopher Hogwood.

Juilliard415 has performed major oratorios and baroque operas every year since its founding, including a rare fully staged production of Rameau’s Hippolyte et Aricie during the 2017-18 season. During the 2018-19 season, the ensemble presented Purcell’s Dido and Aeneas at Opera Holland Park in London and the Royal Opera House of Versailles. The ensemble has also had the distinction of premiering new works for period instruments, most recently in The Seven Last Words Project, a Holy Week concert at the Cathedral of St. John the Divine for which the ensemble commissioned works from seven leading composers, including Nico Muhly, Caroline Shaw, and Tania León.

The ensemble looks forward to resuming its full slate of activity in 2021-22, including a collaboration with Philharmonia Baroque in California and concerts in New York, Boston, and the Netherlands with the Royal Conservatoire of The Hague. They also plan performances throughout Germany with the Yale Institute of Sacred Music. The season sees the return of Pablo Heras-Casado, Masaaki Suzuki, and William Christie.

Rachel Podger has established herself as a leading interpreter of baroque and classical music. Called the “unsurpassed British glory of the baroque violin” (Times), she was the first woman to be awarded the prestigious Royal Academy of Music/Kohn Foundation Bach Prize in October 2015, the Gramophone Artist of the Year in 2018, and the Ambassador for REMA’s Early Music Day 2020. Rachel is the founder and Artistic Director of Brecon Baroque Festival and her own ensemble, Brecon Baroque. Rachel is Patron for The Continuo Foundation.

Following an innovative collaboration recording A Guardian Angel with the vocal ensemble VOCES8, Rachel was thrilled to be one of the Artists in Residence at Wigmore Hall in 2019/2020. Alongside this, Rachel and Christopher Glynn recorded the world premiere of three previously unfinished Mozart sonatas which were completed by Royal Academy of Music Professor Timothy Jones and released in March 2021. Rachel was featured as guest leader for the Academy of Ancient Music in Bach’s B Minor Mass.

Rachel has won numerous awards including two Baroque Instrumental Gramophone Awards for La Stravaganza (2003) and Biber’s Rosary Sonatas (2016), the Diapason d’Or de l’année in the Baroque Ensemble category for her recording of the La Cetra Vivaldi concertos (2012), two BBC Music Magazine awards in the instrumental category for Guardian Angel (2014), and the concerto category for the complete Vivaldi L’Estro Armonico concertos (2016).

Student Tickets
We offer $5 student tickets to all in-person and virtual concerts. Please contact the box office for more information.

Maps were disabled by the visitor on this site.