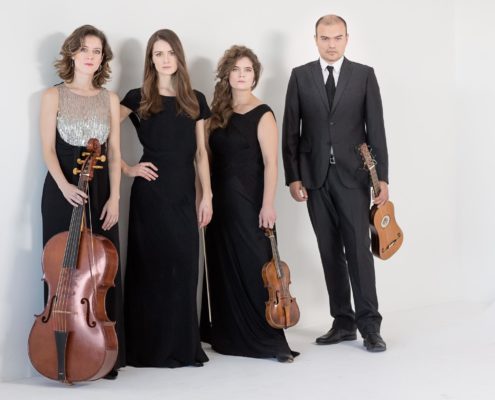 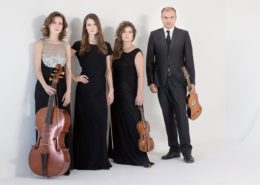 There will be a reception in the lobby of the Kosciuszko Foundation featuring complimentary wine from Italy, the country featured in Pallade Musica’s program.

The accomplished Canadians perform a unique program of idiosyncratic Italian pieces and two of their favorite sonatas by Buxtehude. Berardi’s Canzone prima, Chi la fà, l’aspetti, or “What goes around comes around,” implies the “imperfect circle” of the concert’s title. Chromatic movements abound—for example, the Capriccio Chromatica from Veracini’s Sonata XII.

“The ensemble … made it quite clear why they’re generating such excitement in the early music world. The four musicians brought energy and vigor to their music, playing with technical surety, [and] complete ease…. They worked together with tremendous ensemble sense … supporting each other’s ideas beautifully.”
—Milwaukee Journal Sentinel

The quartet was awarded a 2015 Debut Atlantic tour and was nominated for a 2015 Prix Opus for their Montréal season concert titled “Elles” with soprano, Andréanne Brisson-Paquin. They were also the ensemble-in-residence at the Conservatoire de Musique Rimouski in 2014-2015. Pallade Musica was selected for CAM en tournée and will give ten performances throughout Montréal in 2016-2017. The members of Pallade Musica regularly appear with leading early music ensembles all over the world even as they pursue careers as soloists and teachers. In 2014, Pallade Musica released Verso Venezia, featuring music of Castello, Legrenzi, and Merula, its first CD on the ATMA label—also nominated for a 2014 Opus Prize.

Tanya LaPerrière graduated from the Conservatoire Royal de Bruxelles with a master’s degree in performance where she studied with Mira Glodeanu. She is a promising young baroque violinist whose powerful and sensitive playing makes her an audience favorite. A baroque violin student of Chantal Rémillard, she is also a graduate from McGill University. She may be heard on stages throughout Montreal and abroad with well-known ensembles such as Arion, Ensemble Caprice, Les Boréades de Montréal, l’Harmonie des saisons, and her quartet Pallade Musica. She also performs regularly with Les Idées Heureuses, La Nef and la Bande Montréal Baroque. She has recorded on the Analekta and Atma labels and is the winner of two Juno-awards with Ensemble Caprice and the Arion orchestre baroque.

Fascinated by the cello’s origins and the creative process of new music, Elinor Frey plays both period and modern instruments. Her debut album, Dialoghi, is titled for the solo piece written for her by Steven Stucky. Her recent release on the Belgian label Passacaille, Berlin Sonatas with Lorenzo Ghielmi on fortepiano, was nominated for a Juno award and won a 2015 Québec Opus Prize. Her first Baroque CD, La voce del violoncello, was praised for its “careful scholarship and brilliant layering of moods and tempos” (Toronto Star) and for the “honest, reflective beauty of her music making” (Strings). Frey holds degrees from McGill, Mannes, and Juilliard.

Esteban La Rotta is one of Canada’s leading lutenists. In demand as both a soloist and continuo player, he studied at the Civica Scuola di Musica di Milano under the guidance of lutenist Paul Beier. In Montreal, he studied with Sylvain Bergeron, receiving his doctorate in 2008 with a concentration in baroque guitar. Since 2012, thanks to support from the Canada Council for the Arts, he has studied at the Schola Cantorum Basiliensis focusing on the repertory of the late Middle Ages for solo lute under the guidance of Crawford Young. He studies the renaissance guitar with Hopkinson Smith. As a specialist on a variety of early plucked instruments, La Rotta plays renaissance music as well as early baroque Italian and French repertory for solo theorbo.

Mélisande McNabney performs keyboard music of all periods on harpsichord, piano, and fortepiano. In August 2015, she received the third prize at the International Competition Musica Antiqua in Bruges, Belgium. A Graduate of McGill University and the Conservatoire de musique de Montréal, Mélisande earned her Master’s degree from the Amsterdam Conservatory in June 2010, where she studied harpsichord, continuo, and fortepiano in the classes of Bob van Asperen and Richard Egarr. She is now pursuing her Doctorate degree at McGill University under the guidance of Hank Knox and Tom Beghin, thanks to the support of the Joseph-Armand Bombardier Canada Graduate Scholarships Program. Currently based in Montreal, Mélisande is regularly invited to play with ensembles such as Les Violons du Roy, Arion Orchestre Baroque, Les Idées heureuses, the Theater of Early Music, and Ensemble Caprice.

Maps were disabled by the visitor on this site. Click to open the map in a new window.
Ars Longa